Video Alert: The F-35 Can Maneuver Like Nothing Else 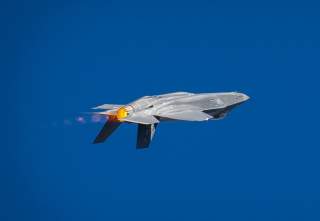 Recent commentary on the F-35 fifth-generation fighter has centered around its firepower and stealth capabilities, but a recently released demonstration video depicts the fighter jet in a pleasantly different light.

A clip from Capt. Capt. Andrew "Dojo" Olson’s instagram page showcases the F-35A Lightning II in a series of dramatic aerial maneuvers, performed at Luke Air Force Base in Arizona.

The highly circulated video, posted last week, begins with Olson performing a pitch-up that seamlessly transitions into a tight loop. Olson proceeds to execute what he teased last month as a “controlled flat spin while falling out of the sky,” essentially a controlled downward spiral. He then slowly resumed flight, ending with a playful left roll before zooming out of the shot.

This brief video, filmed last month, is what Olson-- commander of the F-35 Demonstration Team-- called an “appetizer” for the 2019 air show season. “What makes the fifth generation fighter so special in general is the slow-speed, high angle of attack maneuvering it can do,” Olson went on to say in an Air Force press statement. “I’m really proud of what our team accomplished last year, but I’m also very excited about the upcoming season to finally get to show air show crowds around the world the full potential of the F-35A Lightning II.”

The F-35 Demonstration Team is a separate entity formed out of the Heritage Flight Foundation. The U.S. Air Force hopes that a dedicated team will have the additional freedom and expertise to bring out the F-35A’s unique capabilities, so as to effectively distinguish it from F-line predecessors and competing foreign models in an air show format.

The Demonstration Team will have its first outing at the Melbourne Air and Space Show at Orlando Melbourne International Airport, Florida, from March 30-31.

The F-35A's portfolio is not exactly overflowing with past performances, with its only fully aerobatic demonstration taking place at the 2017 Paris Air Show. Whereas that performance was largely seen as Lockheed Martin’s attempt to placate critics on the heels of prior engine and onboard systems issues, the U.S. Air Force hopes to retake the PR initiative in 2019 to argue a positive case for the F-35: “I’m really proud of what our team accomplished last year, but I’m also very excited about the upcoming season to finally get to show air show crowds around the world the full potential of the F-35A Lightning II,” said Olson.

Notably, the U.S. has been busy negotiating several major F-35 export contracts over the past years. Their core NATO clientele remains exceedingly unlikely to purchase Chinese or Russian products, but Lockheed Martin has recently had to fend off market competition from the EU’s indigenously produced Eurofighter Typhoon. While air show exhibitions are seldom used to reveal new technology, Lockheed Martin has proven adept at exploiting this medium to pitch the F-35 to foreign clients.

The U.S. Air Force’s ambitious 2019 F-35 air show plans come at a time when when Russia and China are actively advertising the capabilities.

Mark Episkopos is a frequent contributor toThe National Interest and serves as research assistant at the Center for the National Interest. Mark is also a PhD student in History at American University. This first appeared earlier in 2019.