Video: When a Rafael Fighter Jet ‘Shot Down’ an F-22 Raptor 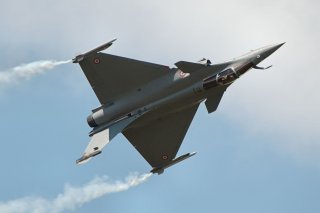 The Lockheed Martin F-22 Raptor—a single-seat, twin-engine, all-weather stealth tactical fighter aircraft—is considered to be one of the most formidable fighter planes known to exist in the world.

According to EurAsian Times, “the fighter aircraft combines a revolutionary leap in technology and capability with reduced support requirements and maintenance costs. …The aircraft’s super-cruise, along with its stealth, integrated avionics, and maneuverability gives its pilots a ‘first-look, first-shot, first-kill’ ability against enemy aircraft.”

It continued: “The Raptor not only has an inherent precision ground-attack capability but can also carry existing and planned short and medium-range air-to-air missiles in its internal bays. The F-22 also comes with an internal 20-mm cannon and provisions for carrying precision ground attack weapons.”

Despite these amazing next-generation features, that doesn’t mean that the F-22 Raptor is invincible. In fact, it was once shot down by a fourth-generation fighter jet—Dassault’s Rafale. Thank goodness it was in a training exercise and not in actual combat.

“While remarkable in its own stead, in comparison to the Raptor, this French warplane doesn’t appear to be as impressive. It is a versatile "omnirole" fighter that can perform all kinds of missions and carry a very wide variety of weapons,” the Times’ expert writes.

“However, it can only reach a speed of 2 Mach, slower than the Raptor’s top speed of 2.25 Mach. The F-22’s rate of climb, maneuverability as well as avionics outpace those of the French jet,” he continued.

With this in mind, should Washington also be concerned about the F-35, known to be the most lethal and versatile aircraft of the modern era? Former Defense Secretary James Mattis even called the F-35 aircraft “critical” for America’s air superiority and applauded its ability to integrate seamlessly with allies who have purchased the jet.

“The F-35 serves as the backbone of allied airpower for thirteen nations and counting. Playing a critical role in joint domain operations, the fighter brings unprecedented situational awareness, information sharing, and connectivity to the coalition,” Lockheed Martin writes on its website.

The Times’ expert noted that the “F-35 has had more field experience than F-22. Unlike the Raptor, which the U.S. refused to export so as to keep this advanced technology to itself, the F-35 aircraft has been exported globally and is used by several U.S. allies.”

He continued: “Its unique avionics and stealth capabilities give the fighter an edge over most other warplanes known today. Just like the Raptor, the F-35 is likely to have the advantage when it comes to stealth. … The twist, though, is likely to be in a Within Visual Range (WVR) combat situation. In dogfights, the French jet can play to its strength. Rafale’s agility, thrust-to-weight ratio, and maneuverability are likely to prove lethal to the F-35. This would be a case of history repeating itself, for an F-35 vs. Rafale dogfight is likely to be very similar to the exchange that happened between Rafale and the F-22 more than a decade ago.”