Walther: The Gun Maker Whose Weapon Killed Hitler (And So Much More) 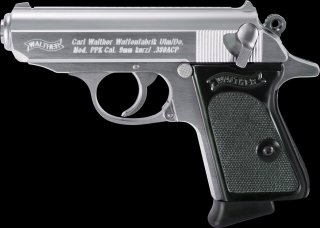 If you’ve seen a James Bond film chances are you’ve heard the name Carl Walther GmbH or at least Walther—as in Walter PPK, the compact semi-automatic pistol associated with the suave British secret agent. We say associated with rather than carried by, because in fact on the big screen Bond didn’t carry the gun as often as some might think, and he didn’t really use it all that often either.

Yet, thanks to the appearance in the early Bond films the gun became iconic worldwide—even if it is almost ironic that Walther became so closely tied to the British spy given that the company is actually German and developed just prior to the Nazi era Its handguns were carried by German police and military officers during World War II, and one was even used as the reported suicide gun of Adolf Hitler.

The now-iconic German arms maker was founded by Carl Walther in 1886, but it can actually trace its origins back another century when Matthias Conrad Pistor first served as a chief armorer and gunsmith to the Kassel Armory. That armory started operations around 1780 to manufacture pistols and weapons, and Pistor established a name for himself for his fine firearm craftsmanship.

Pistor opened his own factory in the Thuringia region, where other local firms also produced small arms for the German states, while others found their way to North America and even India. Some of the local compatriots of Pistor even went to America and worked on the early Kentucky and Pennsylvania “Long Guns.” Pistor opted to remain in Thuringia, but it w his great-grandson Carl Wilhelm Freund Walther who would start what would become one of the most famous of German arms makers.

Carl Walther started as a gunsmith apprentice before he founded the company bearing his name, and even then he initially manufactured hunting and target shooting rifles that utilized Martini and Aydt breech blocks. While he had little equipment and few tools he married into another family with rifle manufacturing, and this allowed the firm to grow and expand.

Of Carl Walther’s five sons, three went into the family business but it was his oldest son Fritz Walter who took the company in a new direction, thanks to an interest in the burgeoning semi-automatic technology. The company introduced its first prototype in 1908 and that Model 1 went into production in June 1911. The blowback actuated handgun proved popular in Germany and Austria-Hungary.

Meet the PP and PPK

After World War I, Fritz continued to refine his designs, and his Model 6 was the first to be chambered for the 9x19-millimeter Parabellum round, which was used in such handguns as the P1908 Luger. That led in 1929 to the PP (Polizeipistole, or police pistol), a blowback-operated semi-automatic pistol that has remained in near-constant use since it was introduced.

That led to a more compact version, the PPK—Polizeipistole Kriminal (a police pistol detective model)—which featured a shorter grip, barrel and frame, but also reduced magazine capacity. The smaller size was to make it more concealable than the original PP, which is actually the handgun the fictional James Bond carried in the film Dr. No.

Both the PP and PPK incorporated several unique features including a double-action trigger with a self-cocking hammer. The pistols have been offered in numerous calibers including .22LR, 6.35-millimeter, 9-millimeter Short and 7.65-millimeter.

German dictator Adolf Hitler committed suicide with this PPK, chambered in .32ACP/7.65-millimeter, while singer Elvis Presley reported owned a silver-finish PPK that was inscribed “TC” for “Taking Care of Business.”

The other “infamous” handgun introduced during the Nazi era was the P38, which was designed to replace the more expensive and complicated Luger. While reportedly the German military didn’t specify a caliber, Fritz Walther knew that only a 9-millimeter version would be successful. The first order of 800 P38s were delivered on April 1, 1939— just five months before the outbreak of World War II and by war’s end more than 1.2 million had been produced.

As an interesting side note, it has been reported that three of the Walther brothers surrendered their hometown of Zella-Mehlis and the company factory to elements of Gen. George Patton's Third Army on April 3, 1945.

As Zella-Mehlis was in the Soviet occupation zone, the Walther business was reduced to little more than designs and patents, but Fritz Walther set up a new shop in Ulm, West Germany and began new production of the P38 for the West German police and military.

In 1993 the firm was acquired by Umarx Sportwaffen, and today operates under the Walther brand as part of the international PW Group. It continues to produce a range of handguns and long guns for law enforcement, military sales and civilians around the world. These include such notable handguns as the P99 and PPQ.

Since 2012, Walther Arms, Inc., located in Fort Smith, Arkansas, has been the official importer and distributor of Walther products in the United States.

It remains a company that was shaken by a war but came back stronger.