Want to Buy a Tank? M4A1 Grizzly Sherman Going to the Auction Block 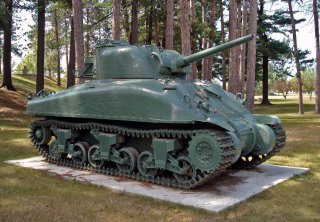 The M4 Sherman, officially known as the “Medium Tank, M4,” was the most widely used medium tank of the United States military and its Western allies during the Second World War. The Sherman, which was named after the American Civil War Union General William Tecumseh Sherman, certainly wasn't the best tank of the war—but it was reliable, relatively cheap to produce, and available in truly significant numbers.

It also certainly wasn't the worst tank either, and that is why the M4 was used around the world after World War II for decades. Only when Paraguay retired three Shermans from the Regimiento Escolta Presidencial (REP, Presidential Escort Regiment) in 2018 did it truly mark the end of the line for the service of the M4.

The Most Produced WWII Tank

More than 50,000 Sherman tanks were produced between 1942 and 1945, and the M4 saw service in all combat theaters of the war. In addition to service with the United States, the M4 was also used by Great Britain, Free France, China, and even the Soviet Union.

Unlike many other World War II tanks and heavy vehicles, of which there are only a handful remaining, such as the German-made Tiger—only seven are in museums and private collections—hundreds of Shermans are known to exist. That said, few rarely come up for sale, and when they do these tanks can fetch a price of a reasonably sized house!

For those in the market for a tank, a very special one is now available—but be prepared to mortgage your house.

A 1943 M4A1 Grizzly variant, which features a non-functional 75mm cannon and one-piece cast hull, is being offered this month for sale in Los Angeles by Bring a Trailer Auctions, a company that specializes in vintage and classic vehicles. Nothing is more classic than an original World War II tank it seems, and any lucky winner is certainly going to need a trailer and a “big” one at that.

This particular model is powered by a Continental-built 975ci Wright Whirlwind nine-cylinder radial engine. According to the auction listing, “Additional equipment includes a Spicer five-speed manual transmission, a demilitarized 75mm main gun, a propane-fired .50 caliber replica machine gun on the turret, and a dummy .30 caliber machine gun in the forward hull. The engine is said to have been serviced during prior ownership, and work performed in preparation for sale included flushing the hydraulic system, changing the engine and transmission oil, adjusting the clutch and brakes, repairing wiring, greasing the road wheels and fittings, repairing the tachometer, and more.”

According to the seller, this is one of less than twenty running M4A1s. While it has been repainted, it is to the appropriate color of olive drab used during the Second World War.

In addition to a big trailer, any new owner is going to need some land, at least if they want to drive it. The steel tracks are not equipped with rubber blocks, so this Sherman is suitable for off road use only.

Vintage tanks have been in high demand in recent years. The Kremlin worked a deal with Laos in early 2019 to re-acquire thirty-some World War II era T-34s, which will be used in parades and movies, as well as for displays in museums.