War Facts: Russia Considers Any Incoming Missile to Be Nuclear 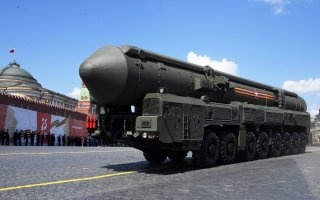 Here's What You Need to Remember: High-ranking Russian military leaders are on the record saying that there is no way for their military to determine if an incoming ballistic missile is in fact fitted with a nuclear or conventional warhead.

Last week Russian military leaders told the nation's official military newspaper Krasnaya Zvezda (Red Star) that any ballistic missile launched at its territory would be perceived as a nuclear attack and that Russia would retaliate in kind with nuclear weapons.

Two senior officers of the Russian military's General Staff, Major General Andrei Sterlin and Colonel Alexander Khryapin, told the Russian military newspaper that there is no way for their military to determine if an incoming ballistic missile is in fact fitted with a nuclear or conventional warhead. As a result, the decision has been made to see all incoming missiles as nuclear and to consider them to be the beginning of a nuclear strike.

"Any attacking missile will be perceived as carrying a nuclear warhead," the Krasnaya Zvezda article reported. "The information about the missile launch will be automatically relayed to the Russian military-political leadership, which will determine the scope of retaliatory action by nuclear forces depending on the evolving situation."

As the Associated Press reported, this line of thinking only reflects Russia's long-held belief that Washington could develop weapons that could allow the West to have the capability to knock out key Russian military assets and government facilities without actually resorting to atomic weapons.

In June, Russia published its nuclear deterrent policy that envisions the use of atomic weapons in response to such an attack—even a conventional one—that could strike critical government and military infrastructure. Russia would thus respond to any attack that "threatens the very existence of the state." Ominously that could even include a case where Russia receives "reliable information" about the launch of ballistic missiles targeting its territory or its allies.

Russia could have some cause to worry.

The United States has, in fact, developed new weapons such as an intermediate-range ballistic missile (IRBM) and a conventional Prompt Global Strike hypersonic weapon system. The United States had developed the weapons after it claimed that Russia broke a key arms control treaty. However, the use of such weapons against Russian territories—even with conventional warheads—could escalate to a true doomsday scenario.

This has put past "close calls" in a very new light.

This could include the January 1995 incident in which then-Russian President Boris Yeltsin became the first world leader to actually activate a "nuclear briefcase"—the case that holds instructions to launch a nuclear strike – when a rocket had been launched off the coast of Norway. For a few tense minutes, Yeltsin discussed the matter with top advisors to consider whether to launch a counter-strike.

The question now is whether President Vladimir Putin would keep calm and carry on in a similar unknown situation or if he could see an errant missile as a true clear and present danger and respond with a nuclear counter-strike.

The Krasnaya Zvezda article suggested that the "specifics of retaliatory action, such as where, when and how much will be determined by Russia's military-political leadership depending on the situation."

For some reason that doesn't instill a ton of confidence given the stakes that are on the line.

This piece first appeared in 2020 and is being republished due to reader interest.