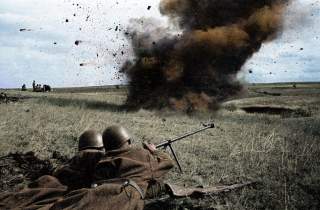 Kursk was not just the largest tank battle in history. It was a titanic struggle that engulfed nearly 3 million Nazi and Soviet soldiers, 8,000 tanks, 35,000 artillery pieces, and 5,000 aircraft.

What would it be like to play a wargame that includes nearly every battalion that fought in that massive battle? Would it be fun and stimulating? Or would it be like one of those all-you-can eat buffets where you stuff yourself until you feel sick?

A computer wargame offers you the chance to find out. Kursk ’43, from publisher John Tiller Software, tackles the challenge of simulating a mammoth battle at the operational level of war. The result that is sometimes strenuous, but also delivers a unique glimpse into the totality of a large WWII battle.

The best word to describe Kursk ’43 is “big.” At a scale of 1 kilometer (0.62 miles) per hexagon, there’s a lot of map space. While the game comes with smaller, quicker scenarios that cover either the northern or southern pincers of the German offensive in July 1943, some hardy players will be tempted to play the 121-turn campaign game that spans the entire battle.

The order of battle in Kursk ’43 is even bigger. There are 4,700 (!) units in the game comprising battalions of tanks, assault guns, armored cars, infantry (halftrack, truck, bicycle or foot-mobile riflemen), combat engineers, artillery (towed and self-propelled howitzers, multiple rocket launchers or mortars), anti-tank guns, and even German Goliath robot mini-tanks. Just the game’s meticulous order of battle alone is a fascinating glimpse into the organization of World War II armies.

Kursk ’43 is part of the Panzer Campaigns series, which includes more than thirty titles covering battles in Russia, France, Italy, North Africa, and the Pacific. The heart of the game is an action point system, where each unit has a certain number of points to spend on moving and shooting (usually twenty-four for foot infantry and engineers, fifty or eighty for tanks and motorized units, and 100 action points for German armored cars). Each terrain type costs a certain amount of action points, as does firing or switching between column and battle formation. One of the key tactical decisions in the game is when to enter or leave column formation, which is required to use roads and cross bridges, but also leaves units highly vulnerable to attack.

Units are rated for attack strength against both armored and unarmored targets, as well as their defense strength and whether they are hard or soft targets themselves. Combat is normally between adjacent hexes, but artillery can fire at targets up to twelve hexes away. Combat results are in men/vehicles/guns eliminated, as well as possible disruption that halves a unit’s firepower until it rallies.

Kursk ’43 encourages combined arms tactics. Tanks are kings in open terrain but clumsy in woods. Infantry is vulnerable to armor unless it has its own tanks or anti-tank guns, but tough to dislodge from rough terrain or entrenchments. Artillery is deadly but vulnerable. Victory points are awarded for destroying enemy troops and equipment (the Soviets get more points for destroying Germans than vice versa) and capturing geographic objectives such as Prokhorovka.

Any simulation of Eastern Front battles must address the disparity in combat skills between the combatants. By mid-1943, the German army had declined from the glory days of the early blitzkriegs, while the Soviet armies were no longer the clumsy, pitiful hordes of 1941. Nonetheless, the Germans still retained superior proficiency in tactical flexibility, and command and control.

Kursk ’43 depicts this in several ways. For starters, German tanks are simply better. In 1941, the panzers had been outgunned by Soviet T-34 tanks, whose very existence shocked the Germans. But Kursk marked the first mass deployment of German Tigers and Panther tanks that gave German armor the technical ascendancy they would enjoy for the remainder of the war. In Kursk ’43, Tigers and Panthers can shoot at targets two hexes distant, while the T-34s only have a one-hex range. In a tank versus tank slugfest, the panzers can stand off and pick off the Soviet armor. Which is exactly what happened at the Battle of Prokhorovka: despite Soviets claims that “the Tigers were burning,” the records show a vastly lopsided score in favor of the panzers.

But the most important aspect of the game is each unit’s Morale Rating, a catch-all that encompasses training, tactical skill (and yes, morale). Troops with better morale move faster, shoot better, are less likely to become disrupted and more likely to rally from disruption. Units have morale ratings of A (best) to F (worst). The Wehrmacht panzer divisions and the SS panzergrenadier (mechanized infantry) divisions are Morale A and the regular German infantry divisions Morale B. For the Soviets, the elite Guards divisions are Morale C and the regular Soviet troops Morale D.

All of which means that Germans can move, attack, and rally better than their Soviet counterparts. Add in a massive phalanx of seventeen panzer and panzergrenadier divisions—by comparison, the Germans could only seven at the Battle of the Bulge—and the Soviets should have crushed at Kursk.

So why didn’t this happen? Kursk’ 43 shows some of the reasons why the German offensive fizzled. One reason is terrain. At a l-kilometer map scale, the supposedly open, tank-friendly country of southern Russia doesn’t look so hospitable. There are lots of clear spaces and gently rolling hills, but the battlefield is dotted with woods, towns, and villages that impede movement and provide cover for the defender. There are also numerous streams and several rivers to impede the German advance, the latter requiring engineers to laboriously build bridges across.

But the most important terrain at Kursk was man-made. As a feat of engineering, the Soviet defenses were one of the wonders of military history: the Red Army built multiple layers of trenches, obstacles, and bunkers, as well as so many minefields that they attained a density of 3,000 mines per kilometer. The game map reveals just how clever the Soviet defenses were: minefields and obstacles channel the attackers into lanes crisscrossed by trenches and with well-placed bunkers at the exits. In Kursk ’43, the most valuable German units aren’t the Tiger tanks, but rather the engineers who clear minefields and tank traps, and build bridges.

Playing Kursk ’43 reveals the game has a bit of a tilt: between equal opponents, the Germans probably have the advantage. Soviet troops are numerous, but they tend to become disrupted under fire, which allows the more mobile Germans to surround and eventually destroy them. But against an inexperienced German player, this can be a challenging game. The panzer divisions have to move fast to penetrate multiple Soviet fortified lines and seize victory hexes before the Red Army can concentrate reserves to stop them.

As a simulation, Kursk ’43 has flaws. Most notable is a sketchy command and control system. The game does include headquarters units that facilitate supply and rally, while the Morale system does capture superior German leadership to some extent. But this pales compares to games like the Flashpoint Campaign system, which imposes delays on units executing orders based on command and control efficiency.

So why recommend Kursk ‘43? Because there is nothing else like it. At their best, historical wargames are like interactive history books: by stepping into the shoes of historical commanders, players can appreciate the challenges they faced.

In strategic-level games, where players control entire nations, individual battles become abstractions. In first-person-shooter video games, the individual soldier becomes the focus, rather than the battle. It’s at the operational level that players confront the challenges of managing a battle, such as the concentration of forces, moving troops quickly through difficult terrain, coordinating different combat arms, and knowing when and where to commit reserves.

Kursk ’43 offers a unique glimpse into one of history’s greatest battles.