Wartime Movie Presidents Who Have—or Have Not—What It Takes 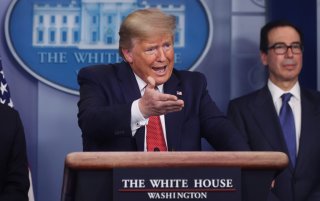 President Donald Trump says he has to be a wartime president to fight the “invisible enemy.” There is something to that. The major difference is that, instead of being guided by a military strategy, U.S. actions have to conform to good public health policy. And that’s exactly the course the administration is following.

Of course, that hasn’t kept a chorus of pundits and media outlets from taking—or making—every opportunity to criticize the president. Many seem to revel in cherry-picking from his tweets and comments to portray Trump as incompetent, inconsistent, ill-disciplined, and filled with ill-will.

What’s missing from that critique is a recognition that strategic leadership is a combination of rhetoric and action. Both must be considered to understand how really effective a president is. For example, no would remember FDR’s day of infamy speech if the United States hadn’t then gone on to fight World War II.

Movies often do an excellent job of illustrating this dynamic. Let’s look at six great examples of celluloid presidents who have—or have not—had what it takes to lead in a time of crisis.

#6 Danny Glover in 2012 (2009).  The Mayan calendar predicts the end of the world and, right on cue, everything starts blowing up, flooding, and sinking. The American president is pretty hapless. To be fair, what could he do?  In the end, Danny Glover gets tsunamied by an aircraft carrier. The last remnant of humanity is saved by the Chinese—so we know this is fiction. HAVE NOT.

#5. Brian Keith in The Wind and the Lion (1975). Bully for Teddy Roosevelt. When a Bedouin chief takes an American woman and her son hostage, the president sends in the Marines to teach Sean Connery a thing or two. HAVE.

#4. Bill Pullman in Independence Day (1996). Kudos to the president for following sound expert advice and responding in a confident and determined manner to an alien invasion. But getting in a fighter jet and going out to fight the mothership… Really? Brave, yes. Smart, no. A famous American general once said “never tie up the dogs and bark yourself.”  Leaders should focus on the tasks only leaders can do, and let other people do their jobs. HAVE NOT.

#3. Bill Murray in Hyde Park on the Hudson (2012). This film does not ignore FDR’s deeply flawed personal life—behavior in office that would be inexcusable by today’s standards. Yet, for all of that (and despite his messed-up ideas on the New Deal), he was a magnificent wartime president. He led the greatest generation to the last century’s greatest accomplishment. The wrong measure of a great leader is perfection. Every leader has shortfalls and misjudgments; that’s not an excuse, just the reality. There needs to be a sense of proportionality in grading great men. Stalin, for example, was a monster. He may have helped win WWII, but there is no excusing the atrocities he perpetuated. Maybe we should have more patience with Trump’s tweeting and a greater appreciation for his decisive actions. As for Bill Murray… HAVE.

#2. Stephanie Paul in Iron Sky (2012). The U.S. president botches the fight against Nazis invading from the moon. If there is no other redeeming value in this movie (and its two—yes two—sequels), at least it shows the difference between the selfless leader and the self-serving mensch. The former makes a great president. The latter, nope. HAVE NOT.

#1. Bruce Greenwood in Thirteen Days (2000). JFK deserves high marks for strong and effective leadership during the Cuban Missile Crisis. The filmmakers took some historical liberties with characters and events, but they illuminate well why a steady hand works well in the worst of times. HAVE.

If, after watching all these movies, Trump looks more like a have than a have not, the reason for that might be that he is, in fact, doing a decent enough job steering the nation through this most difficult time.