We Have the Photo: Stealth Coatings Are Peeling Right Off America’s Submarines 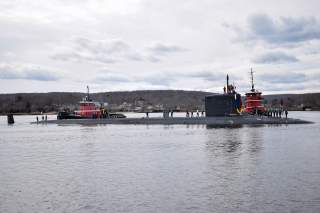 After years of controversy, the U.S. Navy’s newest submarines still are losing their sonar-absorbing coatings during months-long deployments.

The Navy on Feb. 21, 2020 published a photo of the attack submarine USS Colorado sailing into her home port of Groton, Connecticut following a six-month deployment, her first since commissioning in March 2018.

The more of the anechoic layer that falls off during a deployment, the more vulnerable a submarine is to detection.

It’s worth noting the vast distance that Colorado, the Navy’s 15th Virginia-class submarine, sailed during her six months at sea.

“During the deployment, Colorado steamed approximately 39,000 nautical miles with the crew supporting diplomatic relationships by conducting port visits in Haakonsvern, Norway and Faslane, Scotland, and celebrated the milestone of crossing into the Arctic Circle,” the Navy stated.

Such a long voyage would stress any piece of equipment, to say nothing of the delicate, sound-absorbing material. “The coatings need to stay attached in some of the most challenging environments on Earth,” H.I. Sutton explained at Forbes. “The hull of the submarine, despite being made of super-strong steel, flexes as the submarine goes deep. And the coating is exposed to temperature changes.”

But it’s perhaps troubling that the Navy over the years apparently has made little progress in improving the coating’s adhesion. Official photos since at least 2006 frequently have depicted Virginia-class submarines entering and leaving port with noticeable gaps in their outer lines.

The Virginias are on track to become the most numerous type in the Navy’s roughly 50-strong attack-submarine force.

A former employee of Virginia-based Huntington Ingalls Industries, one of the companies that builds the Virginias, in 2019 filed a federal lawsuit, claiming that the firm lied about problems with the anechoic coating.

Ari Lawrence, a former HII engineer, claimed he was fired for raising his concerns about the anechoic hull treatment. Lawrence claimed HII falsified testing, inspection results and certifications related to the coating.

Naval consultant Craig Hooper weighed in with comments to Daily Press. “It’s one of these things where it seems deceptively simple,” Hooper said of the coatings. “But it has a lot of variables.”

Losing sound-absorbing materials is a common problem for operators of deep-diving submarines in all the world’s navies. British and Russian submarines also have appeared in photos with missing anechoic tiles.

Some Russian submarines have titanium hulls, which seem to make the tile problem even worse. Russian Sierra-class boats for years have had the same patches of missing tiles. The patches are so distinctive that foreign analysts reportedly use them to help to identify individual subs.

Where many older submarines have brick-like anechoic tiles, Virginia-class subs feature a coating that shipyard workers apply in large sections. “It creates a smoother surface and was thought to be cheaper, faster and more durable,” Daily Press explained.

But it was apparent more than a decade ago that the Virginia’s coatings regularly were peeling off during operations. Lawrence claimed the shipbuilder lied to cover up the flaws in the Virginias’ coatings. The cover-up endangers American sailors’ lives, Lawrence asserted.

Hooper took a sanguine view. “As it has been explained to me, the failure of anechoic coating is not the end of the world — one can operate at slower speeds to reduce banging or flapping,” he said.

But in a major war with Russia or China, American subs would need every advantage they can get, Hooper added. And the Navy and HII have had plenty of time to fix the problem.

“If this issue was detected in 2006 [or] ‘07, it’s been more than a decade,” Hooper said. “We have sunk billions into the Virginia class, and it is high time the Virginia-class subs met or exceeded their original performance objectives.”