We Still Don't Know Why an F-35 Crashed in Florida 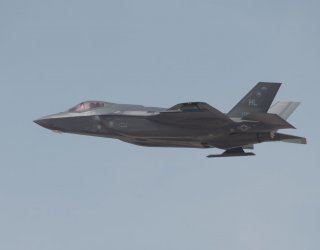 The Air Force 33rd Fighter Wing is now supporting a formal investigation into what might have caused an F-35A to crash upon landing during a nighttime training sortie at Eglin Air Force Base, Fla., paving the way toward ultimately returning to “normal flying operations.”

The cause of the crash is not yet understood, however Air Force officials are clear to emphasize that immediate actions were taken to ensure the “pilot was recovered and all airborne aircraft landed safely,” Col. Jon Wheeler, 33rd Fighter Wing Commander told The National Interest in a written statement.

“The team also ensured the crash site was secure and safe, and all appropriate notifications were made. Our wing is now working diligently in coordination with Team Eglin to support the formal investigation and to make sure we are ready to return to normal flying operations,” Wheeler added.

According to an Air Force report, the pilot is now in “stable” condition, after being transported to the 96th Medical Group Hospital for evaluation and monitoring.

Additional details regarding the nature of the night-training exercise are not yet available, however it does appear the event included multiple aircraft.

There are several pertinent factors worth citing, while of course being clear not to speculate regarding the actual cause of the crash when little is known at the moment. The 5th-Gen aircraft does have a number of built in safety features and technical dimensions intended to protect pilots and also ease some of the procedural complexities and challenges associated with flying an F-35. Many of these are engineered to prevent crashes as well as enable combat effectiveness.

The F-35 is not only engineered with advanced night-vision technology, but the jet is equipped with software-enabled landing trajectory technology engineered to help orient a pilot coming in for landing. It’s called Delta Flight Path, a computer system of particular relevance to the F-35B and F-35C variants for the Marine Corps and Navy tasked with navigating the perils of landing on a moving ship at sea. All of the variants are equipped with a sophisticated degree of computer automation intended to ease the cognitive burden for pilots by organizing otherwise disparate sensor data onto a single, readable screen for the pilot. Referred to as “sensor fusion,” the computers on board the F-35 gather and present navigational, targeting and EO/IR sensor data for the pilot. The data includes speed, altitude, angle of flight as well as surrounding terrain.

The F-35A is also in the process of being equipped with a technology known as Auto-Ground Collision Avoidance, algorithms created to essentially “take over flight” of the aircraft in the event that a pilot is injured or incapacitated during flight. The technology is already installed on many F-16s and is credited with saving lives and millions of dollars in damage to equipment. If a pilot loses consciousness during flight for any reason, the computer automation can instantly re-route the jet to avoid colliding with the ground or nearby terrain. Building upon this success, the Air Force Research Laboratory is already working on Auto Air Collision Avoidance, a technology much more difficult to engineer given that it must prevent two moving objects from colliding—as opposed to merely avoiding ground collisions.

All this being said, there are at this time no indications or specifics, in any way, regarding what may have gone wrong.

“Our top priority is to ensure the safety and wellbeing of our workforce and the local community,” Wheeler said.