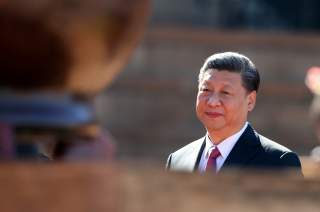 Without advance preparation, U.S. and other international leaders will find the prospects of an unstable China distressing, possibly with the view that it is “too big to fail.” They may even watch from the sidelines as in 1989, not knowing the best course of action or how to influence the decisions of Chinese leaders. This may not be wrong, but such a momentous decision should not be left to ignorance, preexisting mental images or scattered information collected as a crisis breaks.

A couple of weeks ago, AEI scholar Michael Auslin published a column for the Wall Street Journal about a quiet dinner in Washington where a senior China scholar declared the Chinese Communist Party (CCP) had reached the final stage before collapse. The political collapse of the world’s second-largest economy and a nuclear power is no small thing. What should Washington do? Go outside the Fourth Ring Road (a Chinese reference akin to saying go outside the Beltway), forge links to marginalized Chinese and speak out about Chinese human rights to show the Chinese people that the United States has “a moral stake in China’s development.” Even if the CCP’s collapse does not occur for years, these measures will help U.S. policy makers be “on the right side of history.”

Such measures appear trivial in the face of a problem the size of China’s potential political instability and the collapse of its governing structure. By Auslin’s telling, this anonymous China scholar and those nodding in approval think that these first steps constitute a genuine signal to the Chinese people that Washington stands and will stand by them. Rhetorical support, however, will not grace the United States in the eyes of the Chinese people if their discontent demolishes the CCP. Actions, rather than words, in the heat of another crisis at least on the scale of nationwide protests in 1989 will be the measure of Washington’s moral interest in China’s future.

Being prepared for a political crisis with the potential to bring down the CCP requires a much more serious effort that involves both research and planning. Before that day of crisis comes, the mindset for dealing with China must include the ability to imagine a China without the CCP and how that outcome might develop. The tens of thousands of demonstrations serve as a reminder that, despite China’s rise to international prominence, the country still has political fault lines capable of causing an earthquake. With this kind of warning, the moral failing would be to ignore the potential for regime-changing unrest or any other political crisis that might threaten the regime, and what Beijing might do to prevent that from happening.

(Recommended: China: The Real Reason for the Great Oil-Price Crash?)

The purpose of these tasks is to reduce the uncertainty faced by policy makers as a Chinese crisis emerges and cascades across the country, as well as to identify ways and decision points where Washington can influence the CCP’s choices. If an effort is not made to reduce the uncertainty, then fear of the unknown is likely to drive U.S. policy makers to a decision about whether to support the Chinese government out of ignorance, rather than informed calculation.

One of the first research-related steps is to identify the cohesive and centrifugal forces inside China. The CCP used its sixty-six years in power to dismember Chinese civil society and insert itself into any group with the potential to become a political force. Groups that could not be coopted, like Falungong, became pariah and hunted by the regime. Nascent civil-society and activist groups survive in the blind spots of China’s underlapping bureaucratic maze. Chinese political culture beyond the party needs to be understood if Washington wants to claim a “moral stake.”

Ahead of the U.S. invasion of Iraq in 2003, the National Intelligence Council produced an assessment of Iraq’s political prospects after Saddam Hussein fell. The paper updated a periodically updated analysis begun in the early 1980s, and it accurately analyzed the sectarian rivalries and domestic cleavages that blew up under the post-Saddam U.S. administration. It is not clear, however, whether such a paper could even be done on China today, let alone in any accurate manner. Such a paper cannot be about Uyghurs and Tibetans, but the 1.24 billion Han Chinese who inevitably will dominate China’s autocratic or democratic future.

The second is to develop, maintain and update a database of leadership dossiers (as well as their families) that includes points of leverage, such as overseas assets that could be frozen, as well as electronic and telephonic contact information. The U.S. government is certainly as capable as Bloomberg and the New York Times of ferreting out this kind of information. If the CCP is imploding, the tense situation will ensure that many cadres start thinking in terms of their personal and family welfare, rather than the party. When survival is at stake, the CCP’s institutional cohesion is likely to falter as each looks after his own and looks to ensure there is an escape hatch. In this kind of situation, the ability to influence Beijing’s decisions will be highly personalized, and the ability to both contact and shape the incentives of individual decision makers in Zhongnanhai as well as provincial leaders and security officials could prove critical if Washington wants to shape outcomes.

Like corporate and nongovernmental organization databases, this project should be accompanied by records of meetings with U.S. officials and other prominent Americans. This way, Washington has awareness of who might have an existing relationship and can be called upon to reach out to a Chinese official if the situation demands (and it might even help in routine negotiations to which Chinese interlocutors always seem to come better prepared with knowledge of their U.S. counterparts). It also requires the White House to be honest, at least with the U.S. bureaucracy, about its dealing with Beijing—something that has not always been the case in U.S.-Chinese relations.

Third, determining the capability of China’s internal security forces, including domestic intelligence and paramilitary capabilities, is vital to understanding whether unrest is approaching a critical mass. Most studies of China’s future often assume the country’s security services will function, without understanding their ability to protect the regime depends on a fluctuating dynamic that also involves citizen-activists and technology. If political change comes to China through mass public demonstrations, then it is because the assumptions held about a loyal and capable security apparatus did not hold.

Relatedly, any decision for military intervention will involve at the very least the PLA headquarters, if not the Central Military Commission (CMC)—the senior-most political-military policy-making body chaired by Xi Jinping. If the order from the center comes, the military leadership must make a decision whether to support the current government, take power for themselves or stand aside. Although most PLA officers are party members, the relationship between the two organizations has changed substantially since the days of Mao Zedong and Deng Xiaoping when the Chinese leadership was dominated by dual political-military elites. The PLA may be developing a professional identity separate from its party identity. Exacerbated by the military’s relative isolation from society on closed compounds and the absence of shared experiences, China’s robust military modernization has required PLA officers to become better educated and more professional. If the PLA’s professionalization gives strength to the idea that the PLA should be a national army, then U.S. policy makers need to know—and they need to know who is harboring such sentiments.

Fourth, U.S. policy makers and analysts need to map out the decisions Beijing will face as individual incidents of unrest begin to cascade into a larger crisis. First, Chinese leaders will have to make an assessment of whether the demonstrations can be stymied by buying off or capturing protest ringleaders. Or whether the unrest can be isolated and localized before it spreads across too many counties. The next big set of decisions faced in Beijing would involve whether to allow local and provincial authorities to resolve the crisis without involving the central leadership. Based on the complicated arrangements that make horizontal cooperation across jurisdictions almost impossible, widespread protests that cross provincial boundaries will require central intervention to coordinate action. Knowing how this works and who will decide at different levels could be crucial to influencing events. Parts of this process and the decision points can be imagined until new information can be acquired, but the important thing is to spell it out while never thinking that the answer is final. Concrete plans may be useless, to paraphrase President Dwight Eisenhower, but planning will be indispensable.

Fifth, the U.S. government needs to find a way to maintain communication with the Chinese people, even if Beijing starts cutting international linkages. The Great Firewall may not be impervious and it will be difficult to shut down the Chinese internet, but China, as proved by its recent interference in virtual private networks (VPNs), can make it extremely difficult to move communications and information via the Internet. Moving the American propaganda effort solely online without a failsafe would be foolhardy at best. If such a failsafe cannot be found with the capacity to elude censorship, then the next best thing would be retaining the capacity to broadcast radio into China in an emergency.