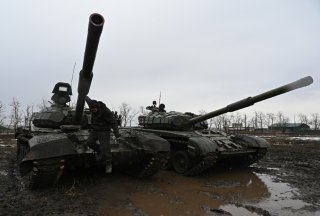 Russia’s Defense Ministry announced that Russian troops have captured the city of Melitopol in Ukraine’s southeastern Zaporizhya region, marking one of the first major metropolitan population centers to be occupied by the invading Russian forces.

The Russian Defense Ministry claimed last week that Russian forces entered Melitopol without any resistance. “In the evening of February 26, after an amphibious landing near the populated locality of Azovskoye (Ukraine), Russian units were on the march, and entered Melitopol, meeting no resistance. Melitopol residents welcomed the Russian troops who were moving around the city. Some elderly citizens took to the streets [waving] red flags," the Russian Defense Ministry said. Russian officials claimed that the Russian military action is aimed solely at Ukrainian military assets and infrastructure and poses no threat to the country’s civilian population.

Contrary to the Kremlin’s statements, Western reporting—corroborated by video footage of what appears to be a hospital purportedly being struck by a Russian missile—suggests that there was fighting inside the city. Local officials alleged that the entry of Russian forces into the city was accompanied by heavy street fighting. A video published on Saturday, allegedly filmed in Melitopol, shows an elderly man reprimanding Russian soldiers in the middle of a street.

London disputes Russia’s account, with British armed forces minister James Heappey telling BBC radio that the city is “still in Ukrainian hands.” The United Kingdom did not immediately offer evidence or corroborating details; the Ukrainian government has not commented on the city’s current status. CNN previously reported a large explosion in Melitopol Air Base, which was home to an unspecified number of Ilyushin Il-76, Il-78, and Antonov An-26 military aircraft.

Russian forces initiated a full-scale assault on Ukraine, characterized as a “special military operation” by Russian president Vladimir Putin, on February 24, striking air bases, command centers, radio stations, garrisons, and other Ukrainian military infrastructure with cruise and ballistic missiles. The Russian shock and awe bombing campaign was accompanied by an ongoing ground assault along three major axes: from the north through Belarus, from the south via Crimea, and from the east through a mobilization of the forces arrayed along the Russian-Ukrainian border.