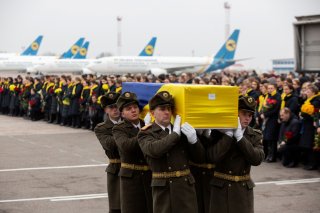 The governments of Canada, Sweden, Ukraine, and the United Kingdom indicated that they would collectively pursue legal action against Iran to cover the cost of unpaid reparations for victims of its January 2020 shootdown of a Ukrainian passenger jet.

“Despite our best efforts over the past two years and multiple attempts to resolve this matter through negotiations, the Coordination Group has determined that further attempts to negotiate with Iran … are futile,” the Coordination Group, which was formed to ensure Iranian reparation payments, announced. Presumably referring to an international lawsuit, the group indicated that its next steps would include “subsequent actions … to resolve this matter in accordance with international law.”

The “Coordination Group” is managed by the governments of Canada, Ukraine, Sweden, and the United Kingdom, each of which had passengers aboard the doomed Ukrainian Airlines Flight 752 that was shot down by Iran shortly after takeoff from Tehran’s Imam Khomeini International Airport. 176 people were killed in the incident, including citizens from each of those four countries, as well as several from Afghanistan.

After early attempts to deny it, Iran eventually acknowledged responsibility for the shootdown, claiming that it happened because of a misaligned radar and an air defense operator’s incorrect reading of the situation. The shootdown occurred on January 8, 2020, days after the assassination of Qassem Soleimani and at a time of heightened tensions between the United States and Iran. During that time, Iranian radar operators were instructed to be vigilant for incoming missiles, which Flight 752 was initially mistaken for.

Even though it has acknowledged responsibility, Tehran has not made any commitment to pay reparations to the family members of those lost in the tragedy. So far, it has specifically refused to do so, in spite of a Canadian court judgment earlier in the week that awarded six petitioners against Iran roughly $84 million.

In December, the Coordination Group told Iran that it had three weeks to reverse its position and allow for negotiations on reparations payments. After the expiration of the deadline, the letter was sent.

A Human Rights Watch report released in May 2021 indicated that Iranian government officials were pursuing family members of the deceased, urging them not to attempt to seek prosecutions of the officials involved.

The government reportedly set aside $150,000 for each victim, though some have refused payment in protest.