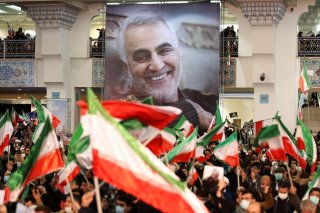 Former U.S. president Donald Trump should be “prosecuted and killed” for his role in the killing of Iranian general Qassem Soleimani’s assassination, Iranian president Ebrahim Raisi proclaimed in a speech on Monday.

"If Trump and [former Secretary of State Mike] Pompeo are not tried in a fair court for the criminal act of assassinating General Soleimani, Muslims will take our martyr's revenge,” Raisi said in his remarks. The Iranian leader insisted that Trump should be “tried and judged under the law of retribution, and God’s ruling must be carried out against him,” seeming to suggest the former president’s execution.

Monday marked the second anniversary of Soleimani’s death in a U.S. airstrike at the Baghdad International Airport. The airstrike was ordered by Trump in retaliation for an Iran-linked attack on the U.S. embassy in Baghdad that had taken place three days earlier.

To mark the anniversary of Soleimani’s death, Iran and its allied paramilitary groups across the Middle East held vigils and other events to mourn his passing and express the desire for revenge against the United States.

Iranian Prosecutor-General Mohammad Jafar Montazeri indicated during an appearance on Iran’s state-run television network that Iran had attempted to construct a legal case against the Trump administration for the killing. Montazeri claimed that the Iranian government had identified 127 suspects they deemed responsible for the assassination—74 of whom were U.S. nationals—and shared their case with nine other countries.

“The criminal former president is at the top of the list,” he added, apparently referring to Trump.

Separately, the Iranian government has pushed the United Nations to take action against the United States and Israel, which it has accused of helping to plan the attack.

The Trump administration’s legal justification for Soleimani’s killing evolved in the days following the attack. U.S. officials initially argued that they had information implicating Soleimani in an imminent attack against U.S. forces and claimed that the killing had taken place in self-defense. Several days later, then-Attorney General William Barr argued that Soleimani was a “legitimate military target” and Trump, therefore, had the legal authority for the strike.

During his lifetime, Soleimani had led the Quds (“Jerusalem”) Force, a branch of Iran’s Islamic Revolutionary Guard Corps (IRGC) responsible for supporting Iran-allied groups in other countries. The Quds Force has worked closely with the Iran-allied “Popular Mobilization Forces” (PMF) in Iraq, the government of Bashar al-Assad in Syria, and the Hezbollah group in Lebanon. The airstrike that killed Soleimani also took the life of Abu Mahdi al-Muhandis, the leader of the PMF.

Soleimani was alternatively praised and reviled for his highly effective relationships with these groups and was known for his aversion to publicity, earning him the epithet, “The Shadow Commander.”