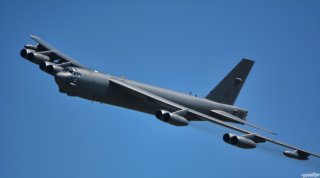 The Air Force is surging forward with a hypersonic-weapons-armed B-52 Stratofortress Bomber, a development sure to impact existing paradigms for bombing and air attack. The service completed a simulated shot at a target 600 nautical miles away with an AGM-183 Air-Launched Rapid Response Weapon, a process through which the B-52 received target data from sensors 1,000 miles away at Joint Base Elmendorf-Richardson, Alaska, according to an Air Force report.

The Air-Launched Rapid Response Weapon, or ARRW, is a fast emerging boost-glide hypersonic weapon reported to be able to reach speeds of Mach 7 to descend upon targets. While just a simulated shot, the process described in the Air Force report is a critical step toward successfully air-firing a hypersonic weapon.  The development took place during a massive Air Force exercise on May 5 in Alaska called Northern Edge wherein the weapons completed a simulated “hypersonic kill chain employment from sensor to shooter.”

The simulated firing is part of what appears to be a massive Air Force push to accelerate development, prototyping, test firing, and ultimate deployment of the weapons. While the U.S. has had hypersonic weapons on the fast track for quite some time, the added push in recent years may be due in part to highly publicized Russian and Chinese hypersonic weapons tests and public statements about new weapons. For example, Russian news reports from TASS have claimed that Russia has already deployed an operational air-launched hypersonic weapon.

The advent of aircraft armed with hypersonic weapons represents a substantial shift when it comes to airpower, particularly when it comes to standoff range and speed of attack. A hypersonic-missile-armed B-52 bomber, for instance, could destroy enemy targets from much different and therefore much safer standoff ranges, a tactical scenario that vastly changes attack options. Such a possibility may introduce new targeting possibilities for a somewhat less-than-stealthy B-52 which would of course be challenged to operate against advanced enemy air defenses. Also, it does not seem at all impossible that an air-launched boost-glide weapon could be used against an aerial target in new ways.

A boost-glide weapon takes off and reaches hypersonic speeds with a booster, before leveraging that speed to “glide” into a target. Certain hypersonic weapons have actually been described as being able to “bounce” or skip off of the upper boundaries of the earth’s atmosphere, before relying upon the speed of descent to eliminate targets. Hypersonic weapons can rely upon scramjet technology to reach hypersonic speeds and then rely upon advanced guidance systems to strike targets.

Naturally “speed” is something which could be considered as the principal advantage of hypersonic attack, as it makes them nearly impossible to defend against. Perhaps a B-52 could launch a hypersonic weapon to destroy enemy air defenses from safer stand-off distances, therefore potentially removing or at least diminishing the need to fly manned stealth aircraft over high-risk areas.