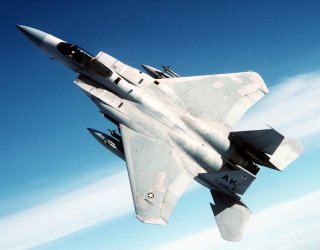 January was a busy month for both the outgoing and incoming president of the United States. No, we are not talking about Donald Trump and Joe Biden.

In the first month of 1993, the outbound and inbound administrations of George H. W. Bush and Bill Clinton cooperated, if not colluded, as a major airstrike was carried out against Iraq. Bush, of course, hit the high-water mark of his presidency two years prior with the successful execution of Operation Desert Storm, which liberated Kuwait after a six-month occupation by the forces of dictator Saddam Hussein.

But the fighting never stopped. By fall 1992, the U.S. and its allies were enforcing two no-fly zones over Iraq—Provide Comfort to protect the Kurdish minority in the north and Southern Watch to defend the Shia majority in the south—and the rogue Middle Eastern country under siege was beginning to lash out. Saddam tested the no-fly zone using warplanes and deployed air defense units, posing a threat to Coalition aircraft patrolling the airspace. Only a few weeks before Clinton was set to assume office, the situation escalated as an Iraqi fighter was shot down by the U.S. Air Force.

Then, on January 13, a massive airstrike involving 115 U.S-Coalition warplanes was launched against Iraq air defense installations in the southern no-fly zone, in response to the failure to remove surface-to-air missiles (SAMs) from the area. The attack was considered something of a failure, with only sixteen of thirty-three targets having been struck, despite a full array of modern air power utilized in the operation. Additional strikes, including a Tomahawk cruise missile attack, took place later that month, two coming after Clinton formally assumed office, one of which took place less than a day after the inauguration.

Ten years later, after the junior Bush relieved Clinton of his duties, a U.S.-British airstrike was conducted in southern Iraq, among the largest prior to Iraqi Freedom. As in 1993, it was in response to increased violations of the no-fly zone and attacks on Coalition aircraft. Consisting of 70 warplanes, results were again mixed, leaning in the direction of failure. It was, however, the first military action of George W. Bush’s presidency and an omen of things to come, though few believed an invasion of Iraq would happen any time soon.

On April 17, 2017, President Trump approved a strike on a Syrian airbase as punishment for the Khan Shaykhun chemical attack which killed approximately one hundred, many of them children. The incident so deeply unnerved Trump that he openly considered assassinating Syrian president Bashar Assad. The air attack was substituted instead, constituting one of the most significant military actions taken directly against Syria, whereas U.S. involvement in the country since 2014 was focused primarily on defeating ISIS.

Finally, on Feb. 25, 2021, President Biden authorized a retaliatory action in response to Iran-backed militias which had launched missiles at a base in Iraq occupied by U.S. troops. The missile attack killed one non-U.S. contractor and injured an American servicemember, plus several others. The target of the day was a facility located near the Iraq-Syria border used by the Kata’b Hezbollah militia, one of the most active in the region among Iran-aligned Shia paramilitary forces, with 22 militants said to have been killed.

All these events across the decades have two things in common. First, they occurred in the first 100 days of a brand-new presidency. Second, they amounted to a continuation of a policy set by their predecessor, despite being of a different party. Regardless of what they may have said to win over voters, these military actions within each president’s respective first 100 days tend to be indicative of how each new president chooses to implement foreign policy. Clinton’s early actions against Iraq were just the beginning of eight years of unabating tensions and military stand-off with Iraq, Bush’s February 2001 strike was followed up by a full-scale invasion two years later, and Trump’s attack on Syria resulted in a continuation of the U.S. mission there, despite large number of troops being withdrawn.

It is yet to be seen what Biden’s early actions in Syria will bring about. But, if history serves as any guide, restraint nor withdrawal appear to be in the cards.

It is this continuity in policy over different administrations that is most remarkable. U.S. military forces remain in Iraq today because U.S. forces never quite left Iraq since 1991. Likewise, the U.S. remains in Syria and Afghanistan because it kept expanding the mission once it stepped foot in-country or could not achieve such broad, open-ended goals. Whether this can be attributed to “mission creep,” “policy creep,” or a general sense of hubris, it proves that once a war is started, it becomes exceedingly difficult to end.

This is partly because ending a war ultimately requires a political resolution, not a military one. Political decisions, more so than military decisions, carry requisite political costs participants are unwilling to bear, either because it damages their domestic standing or international prestige. Those who belong to the policymaking class may recognize the need to end the war in Afghanistan, for example, but think a withdrawal should not happen until the gains of the last 20 years can be irreversibly secured. As many have argued, this is an impossibility which guarantees a permanent military mission abroad, as the problems in these war-torn countries come down to issues beyond the world’s ability to resolve.

Ironically, the cost of departing has become as high as it is in large part because the U.S. has chosen to stick these conflicts out. Sunk-cost fallacy notwithstanding, it has become expensive to leave these wars behind because they have gone on for so long and because the U.S. has already expended so much blood and treasure in the process. Coupled with the fear of the unintended consequences of abandonment, be it another 9/11, the re-emergence of ISIS, etc., policymakers may gauge that paying the higher upfront cost now may be cheaper than the potential cost of leaving the job unfinished.

Of course, this logic is predicated on the assumption there exists a possibility, in our lifetimes, that these wars will end to America’s satisfaction. After all, the U.S. helped bring the atrocious, horrifically brutal Yugoslav Wars of the 1990s to an end and the countries have largely recovered from the conflict. Why could not the wars of Afghanistan, Iraq, and Syria also come to an end?

They may, indeed, one day. But present trend lines provide no reason for optimism. In Afghanistan alone, over 4,000 have died and over a thousand in Syria so far in 2021. Meanwhile, tensions with Iran, which many presumed would de-escalate upon the departure of Trump from Washington, seem to instead be escalating at an alarming rate. And while Biden lacks the belligerent rhetoric of his predecessor, his actions so far are that of a president seeking to maintain the confrontation with Iran, just as his predecessors did with America’s other enemies.

Of course, Iran’s own actions do not make Washington’s choices easier. What is plain to see is that the next four years may have more foreign crises and war in store than Americans had hoped for, given the election of a new president. With history as our guide, this should come as no surprise.