What Does This Mean: Russia Says RS-28 Sarmat ICBM Has "Unlimited Range" 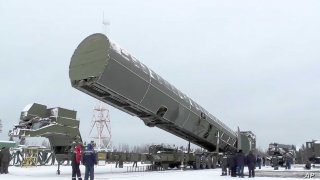 Key point: It is much too early to conclude that Sarmat development is back on track

Mark Episkopos is a frequent contributor to The National Interest and serves as research assistant at the Center for the National Interest. Mark is also a PhD student in History at American University. This article first appeared last spring.