What Exactly Is Trump Time? 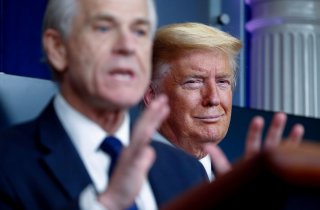 Quizzical reactions met Peter Navarro’s statement at a White House press briefing last week, related to the U.S. government’s response to the coronavirus pandemic. “The first order President Trump signed was vigorous, swift,” Navarro said. “It was the GM [General Motors] order which directed GM to make ventilators in Kokomo, Indiana in ‘Trump Time’—which is to say, as fast as possible.” Trump Time?

Peter Navarro has been a member of Donald Trump’s administration since the beginning. He first served as Director of the National Trade Council for a few months, before being appointed Director of the Office of Trade and Manufacturing Policy in April 2017, a position he’s held since. The OTMP was created by executive action by Trump explicitly for Navarro, an economist who shares the president’s predilection for protectionism, tariffs, and restructuring perceived trade imbalances.

Under Navarro, the administration has adhered to Trump’s anti-free trade diatribes from the 2016 election, to the boon of a new class of economic nationalist conservatives. His comment at last week’s press conference was in reference to the president’s invocation of the Defense Production Act of 1950, which in certain circumstances gives the president the authority to direct private companies to meet certain industrial ends; in this case, obligating General Motors to construct ventilators in a public health crisis. Navarro has been made the policy coordinator for all things related to the Defense Production Act.

Last week was not the first time Navarro complimented the president by reworking his name into a euphemism for efficient speed. “In this Administration, we take appropriate risks to protect the public. We move in Trump Time to solve problems. We always skate to where the puck might be—in this case a full-blown pandemic.”

That’s an excerpt taken from a February 23 memo written by Navarro warning the White House that immediate, drastic action must be taken to prevent a major outbreak of the coronavirus in the United States. This was written over three weeks before the Trump administration began publicly treating the coronavirus as a serious crisis.

Even more remarkable is an earlier memo, obtained by Axios, dated January 29. That is only nine days after the first coronavirus case reached American shores. “The lack of immune protection or an existing cure or vaccine would leave Americans defenseless in the case of a full-blown coronavirus outbreak on U.S. soil,” Navarro warned in what is currently the earliest high-level alert known to circulate in the White House. “This lack of protection elevates the risk of the coronavirus evolving into a full-blown pandemic, imperiling the lives of millions of Americans.”

Navarro, a lifelong China hawk whose 2011 book “Death by China” warned about the country’s currency manipulation and abusive trade policies, advised Trump that a travel ban should be inflicted on Beijing as soon as possible. The president implemented this plan just five days after the memo was written, on February 2.