What It's Like Being a Russian Mercenary in Syria 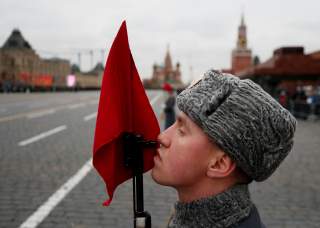 Good pay, bad food and corruption. That’s the life of a Russian mercenary in Syria, according to one veteran who’s glad to be out of there.

Earlier this year, the Russian newspaper Sobesednik published an interview (English translation here) with a Russian ex-soldier who just returned from Syria after working as a private military contractor, or PMC.

Aleksander (not his real name) was a combat-experienced former Russian artillery officer. Eager to pay off his mortgage, he joined a PMC through a friend of a friend who had just returned from contract military work in Syria.

“You sign a contract, but everyone understands that it is a worthless piece of paper,” Aleksander told the newspaper. “Mine did not even have a seal, just signatures. An LLC [limited liability corporation] something or other. A name I do not even remember because it is impossible to find if anything happens, registered in the Virgin Islands. I flew out in March and spent the next six months in the middle of Syria, north of Palmyra, practically in the desert.”

His pay was 200,000 rubles (US$3,100) a month. That’s a paltry sum compared to pay at U.S. private military contractors, where pay can be as high as $23,000 a month, or more than a quarter-million dollars per year. But 200,000 rubles seemed a bonanza for someone accustomed to the low salaries and poor living conditions faced by Russian soldiers.

“Maybe in Moscow people get this kind of money working in offices, but for the majority of those who go to ‘make war,’ this is an unrealistically huge amount,” Aleksander explained.

The pay was good, but not the equipment. “Equipment is usually your own, brought from Russia. There are no mobile phones. You can, of course, get a phone locally, but after several scandals with fighters taking pictures at secret locations and posting them on social media, control became stricter for disclosing information. You could easily get sent home without being paid a single ruble.”

Not to mention the food was lousy. “Canned food, rice, and pasta. They would drop off a few bags for a group for a month and we gradually ate through them. The fighters laughed that this food was the most dangerous factor of the entire deployment. It is impossible to survive more than six months on it.”

Luckily for Aleksander and his comrades, the rebels battling the Syrian government and their Iranian and Russian allies have mostly been crushed. But not totally crushed. “There is no fierce fighting in Syria anymore. Officially, the military operation is over. But skirmishes and shootouts are a common thing.”

In fact, one reason the insurgency continues is corruption. “Our main currency there was ammunition,” Aleksander recalled. “Sell 10 to 15 cartridges to a middleman, get several packs of cigarettes, alcohol, or some better gear.”

After six months, Aleksander returned home, a little richer, his body and mind intact and yet disgusted and disillusioned. “I fulfilled my personal task. I returned alive. I did not participate in the obvious dirt that follows you in nightmares for the rest of your life. I paid off the mortgage, which is why I went to Syria, and remained in good standing with the commanders.

“They are calling me back. But I will not go. I had enough; it is anarchy and lawlessness there. The country after the war is even worse than it was during the war.”