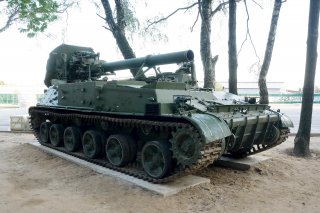 An image out of an arms manufacturer’s corporate calendar, posted earlier this week, offers a first glimpse at the finalized design of the Russian Air Force's new 2S42 “Lotos” self-propelled artillery gun.

The depiction comes from the official “Central Scientific - Research Institute for Precision Machine Engineering” (TsNIITochMash) Instagram profile, accompanied by a descriptive quote from its head artillery engineer Dmitry Melikhov. Lotos is shown on the August page, likely in recognition of August 2 as being national “Airborne Forces Day” and August 12 as national “Air Force Day” in Russia. The design closely resembles a previous scale model displayed at Russia’s “Army 2017” exhibition.

Melikhov’s featured quote is an extensive description of Lotos’ aesthetic design philosophy, an area that TsNIITochMash engineers apparently approached with a great deal of careful thought:

“The creation of any technology, but especially artillery, must be approached with inspiration. Something greater must stand behind raw technical specifications... our unique inspiration became the Lotus flower. Despite its outward fragility, it grows in the harshest of circumstances. It is an ideal blend of beauty, grace, and invincibility. The amphibious, air-droppable, self-propelled ‘Lotos’ system, with its high ballistic performance and effective weaponry, is manufactured with the ‘golden ratio’ principle and, despite its power, is a feast for the eyes.”

Its alleged, flower-like beauty notwithstanding, Lotos is shaping up to be an important milestone in Russia’s ongoing effort to modernize its artillery catalog. The political science chair of the Plekhanov Russian University of Economics, Andrei Koshkin, explained to Russian media that the development of Lotos marks Russia’s re-commitment to specialized, highly mobile airborne forces, thereby minimizing overlap with Russia’s land forces roster.

As previously described by the National Interest, Lotos was born out of the “Zauralets-D” project to produce a new generation of Russian artillery guns. There are few confirmed details on the course of the Zauralets project, with some reports pointing to early production and reliability concerns. Initially conceived as a 120mm derivative of its larger 152mm Zauralets cousin, Lotos fully replaced Zauralets by 2017.

TsNIITochMash executive Dmitry Semizorov claims that the move to a smaller 120mm gun will lead to gains in range and shot accuracy, but this will likely come at a tangible cost to firepower and can lead to reduced efficacy against armored targets.

Lotos’ mortar gun is compatible with a wide range of 120mm ammunition and mortar mines, fired from an automated turret housed inside a fully-amphibious BMD-4 chassis. In keeping with the needs of the Russian Air Force, Lotos with its four-man crew can be deployed in a fully operational state from an airborne Il-76 military transport plane. As with other equipment built on the BMD-4 chassis, an Il-76 should be capable of carrying up to two Lotos systems.

Lotos can fire six to eight shots per minute at an effective range of up to 13 km, as compared with the 8.8 km of its Soviet 2S9 Nona predecessor. The BMD-4, with its maximum speed of 70 km/h and more powerful 450 horsepower 2V-06-2 engine, likewise presents a marked improvement in maneuverability over Nona’s 1970’s BTR-D hull.

2S42 Lotos is being developed in tandem with Russia’s new Zavet-D artillery fire control vehicle; both will undergo final state trials this year, with serial production scheduled to begin in 2020.