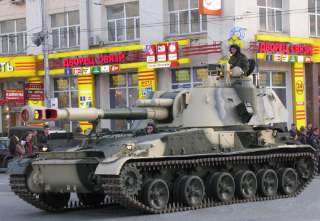 The Russian Air Force (VDV) continues to expand and modernize its artillery lineup with a spate of new fire control vehicles and self-propelled systems, scheduled to complete final testing in 2019.

As the Russian Ministry of Defense announced last week, "In 2019, the 2S42 Lotos 120mm self-propelled artillery gun and the Zavet-D artillery fire control vehicle will enter final state trials before they are accepted as the armament of the Airborne Force."

What role will Zavet-D fill in the Russian Air Force? Consider the model that it is meant to replace. The current backbone of Russian artillery fire control is the 36-year old 1B119” "Rheostat,” itself designed on the foundation of the early 1970’s Soviet BTR-D personnel carrier.

There is an increasing concern that Russia’s newer artillery weapons will be bottlenecked by the aging target acquisition and tracking technology of its fire control vehicles. Whereas the later 1B119-1 was a minor 2006 upgrade that layered improved communication technology over the same architecture, the Zavet-D is a comprehensive redesign to phase out the 1B119 as Russia’s staple fire control vehicle over the decades to come.

Zavet-D is built on the foundation of the much newer BTR-MD “Rakusha” transport vehicle, which boasts superior handling, speed, and navigation of water-based obstacles. BTR-MD’s modern internal design allows for a more comprehensive integration of communication systems, to more rapidly and reliably guide nearby artillery weapons.

This modern communication technology is accompanied by improved radars to effectively detect stationary and camouflaged targets. Zavet-D’s digital onboard controls will enable it to control drones, which can be used for forward reconnaissance purposes. In keeping with the needs of the Russian Air Force, Zavet-D is expected to retain the paradrop capability of its predecessor. Russia’s Il-76 is among the military transport planes that will be able to deploy manned, fully operational Zavet-D units while airborne.

Zavet-D is designed to bring out the full combat potential of Russia’s latest artillery weapons, like the “Lotos” 120mm self-propelled artillery gun being manufactured alongside it. Lotos grew out of Russia’s original 152mm “Zauralets-D” project to create a modern artillery system based on the latest BMD-4 chassis, which was itself an effort to replace the aging Soviet 2S9 Nona system.

Development of Lotos and Zavet-D will occur in tandem, so as to present the next generation of Russian artillery with a fresh new face: "We are expected to fully develop the [Lotos] system in 2019 and then hold its state trials with the advanced Zavet-D artillery control vehicle," Semizorov says. While specific deployment plans remain unknown, these general-purpose artillery systems have a wide potential application in high and low-intensity conflicts alike.

This news comes on heels of prior large Russian investments into modern artillery technology. These include its “Penicillin” advanced artillery reconnaissance system slated to enter serial production in early 2019, and the 2S41 Drok 82mm self-propelled mortar carrier that will undergo testing in the same year.