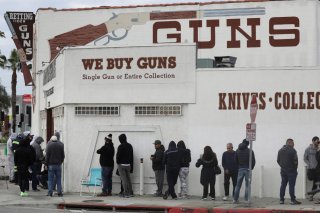 While the start of the pandemic is nearing its two-year anniversary, that is also the case for the nation’s ammunition shortage. Since early 2020, hunters, target shooters, and even some police departments have had trouble getting their hands on ammunition. And when they have been able to find ammunition, it has cost much more than usual.

The shortage has been attributed to many factors, most of them related to the explosion of gun ownership in the United States since the pandemic began. It has also been tied to years of consolidation in the ammunition industry, the 2020 bankruptcy of Remington, pandemic-era supply chain issues, and even State Department sanctions on Russian-made ammo.

The recent surge in gun ownership, meanwhile, was seen as a reaction to social unrest in 2020 and the arrival of a Democrat in the White House in 2021. There have even been baseless conspiracy theories claiming that the government has somehow purposely engineered the shortage, even though the ammo shortage has continued across a pair of diametrically opposed presidential administrations.

The major ammunition companies have ramped up manufacturing capacity, but most industry observers believe the shortages will continue at least through the end of the year.

This week, WAFB in Baton Rouge became the latest local media outlet to take a look at the current state of the ammunition shortage. WAFB’s story cited a recent report from the National Shooting Sports Federation which found that 5.4 million people in the United States purchased guns in 2021.

Davis added that gun demand has risen during Democratic administrations and fallen during Republican ones, a pattern that has repeated itself for “30 to 40 years.”

Late last year, WDAM, a TV station next door in Mississippi, looked at the state of the ammo shortage.

“It affects us on a daily basis. General ammo, hunting ammo … is very hard to get. Some we have and some we just can’t find at all,” T-Voe Trosclair, an employee at a local outdoors store, told the station. However, the area’s sheriff’s department had been able to stock up in advance.