When China Invades Taiwan, These Ships Will Be Key to Beijing’s Success 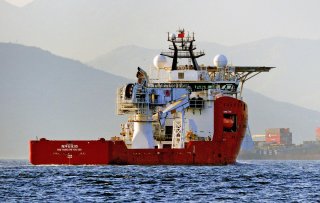 Much ink has been spilled about Beijing’s new aircraft carriers, anti-ship missiles, and anti-access/area-denial capabilities. But despite their humble role now, these transport ships would be no less an important component to a Chinese invasion of Taiwan.

Taiwan’s northwest coast facing the Taiwan Strait. Several hours before dawn. It is cool and dark. Quiet too—until the low rumble of hundreds of ships is be heard somewhere toward the horizon. China’s long-anticipated invasion flotilla slowly chugs into view.

As expected, hundreds of Chinese warships of all kinds spread out along the dim horizon, blotting out the moon’s reflection—a medley of destroyers, cruisers, frigates, and coast guard cutters, fan outwards. Missiles scream toward the island and from the beach toward the incoming ships. Anti-missile defenses on both sides blaze outward, lighting up parts of the sky.

Though formidable, the enormous strike group Beijing sent against Taiwan seems to lack a significant component crucial to amphibious assault: troop transports and landing ships, the kinds of vessels that do not sink enemy ships but bring men and materiel over the water. If the People’s Liberation Army Navy (PLAN) can’t get boots and armor on the ground, they stand little chance of carving out a foothold, a beachhead from which to drive towards Taipei and throughout the rest of the island.

Though nominally a civil industry, China’s civilian shipping industry is inextricably linked to the Chinese military. In 2015, Beijing alerted the Chinese shipbuilding industry to follow a new set of building guidelines that make many Chinese-built shipping vessels interoperable with the People’s Liberation Army Navy.

The so-called Technical Standards for New Civilian Ships to Implement National Defense Requirements outlined five categories of ships that should adhere to these guidelines: container, roll-on/roll-off, multipurpose, bulk carrier, and breakbulk. These vessels could be called up to support an invasion operation in a pinch—hundreds of thousands of tons of shipping, easily interoperable with the Chinese Navy.

To be sure, Chinese shipping boats turned ersatz troop transports would certainly not be as survivable as PLAN amphibious assault ships. But that hardly matters. Even dedicated, militarized transports are not solely responsible for their defense but rely on the strength of their flotilla for protection. Moreover, survivability questions aside, a Chinese civilian-military transport capability has another factor going for it: sheer numbers. China’s domestic shipbuilding industry is the largest in the world, by far.

So while Beijing’s hard power—and the People’s Liberation Army Navy’s capabilities in particular—are certainly worthy of notice, the PLAN’s close relationship with civilian shipping should not be overlooked.