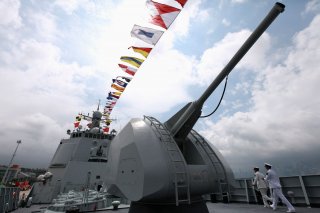 The Department of Defense’ annual report on China (Military and Security Developments Involving the People’s Republic of China 2020) is out, and the conclusions are grim. The People’s Liberation Army Navy is bigger than the United States Navy.

Not only is the PLAN large, numbering about 350 ships and submarines, it is becoming more modern. “The People’s Liberation Army Navy (PLAN)—the largest navy in the world—is an increasingly modern and flexible force that has focused on replacing previous generations of platforms with limited capabilities in favor of larger, modern multi-role combatants,” the DoD report explained.

According to the report, the new PLA Navy vessels make up a wide range of platforms, including “submarines, surface combatants, amphibious warfare ships, aircraft carriers, and auxiliary ships.” Not only are the PLAN vessels themselves relatively modern, so are the weapons they are equipped with. “As of 2019, the PLAN is largely composed of modern multi-role platforms featuring advanced anti-ship, antiair, and anti-submarine weapons and sensors.”

One of the more noteworthy platforms that the report mentions are China’s brand-new aircraft carriers. “In particular, China’s aircraft carriers and planned follow-on carriers, once operational, will extend air defense coverage beyond the range of coastal and shipboard missile systems and will enable task group operations at increasingly longer ranges.” China’s first domestically-built aircraft carrier, the Shandong, entered service in 2019, and another is expected to be in service by 2023.

The Department of Defense report also specifically mentions China’s amphibious warfare ships, “highly capable large-deck amphibious ships,” not dissimilar to the United States’ Wasp-class amphibious assault ships. These ships will provide the PLAN with “greater capacity, endurance, and more flexibility for long-range operations than the PLAN’s older landing ships, which it has reduced in number over the last decade with obsolete units being decommissioned,” and in particular will allow for more significant power projection deeper into the Pacific.

Although numbers alone do not necessarily give insights into qualitative advantages like personal training and experience, they do indicate an increasing ability to project power father and farther away from the Chinese mainland, toward China’s disputed maritime claims in the South China Sea, and toward the Republic of Taiwan which Beijing considers a renegade province.

Another aspect of Chinese naval buildup worth looking at is China’s overseas military bases. Though Beijing’s overseas footprint is particularly light, especially when compared to that of the United States, China clearly hopes to project power more firmly into neighboring areas. Current or planned naval bases, particularly in Sri Lanka and Pakistan are evidence of this, and could help to hamper operations for a Chinese adversary in the event of a conflict in or around the Western Pacific.