Where Russia’s Invasion of Ukraine Will Go From Here 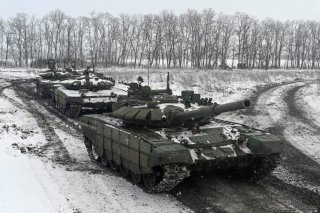 As the Russian invasion of Ukraine unfolds, the scale, scope, and ambition of Vladimir Putin’s operation appear to be what many feared: a multi-pronged, expansive, and multi-domain operation.

What will this invasion look like? Initial reports suggest attacks began with long-range missile strikes on Ukrainian airports and other military targets, and CNN aired video of armored vehicles entering Ukraine from Belarus. This would suggest that a large-scale ground invasion is now underway.

The National Interest (TNI) spoke with Scott Rutter, a decorated combat veteran who commanded an Infantry Company during Operation Iraqi Freedom. His units engaged and destroyed the Iraqi Republican Guard in some now-famous confrontations near the Baghdad airport. Also a Gulf War Veteran, Rutter is a long-time student of the Russian military dating back to the Cold War era and is familiar with Russian weapons, tactics, and more recent technological innovations.

Russia’s invasion is “a hybrid version of what we studied in the 1970s and 1980s, which is the blitzkrieg combined with an actual force march from Russians coming across the border. So far, this time, it's a little bit different. It will likely involve seizing key intersections and moving artillery and 152-millimeter mortar in order to support those BTR-80s [Russian armored vehicles] that we've seen on the news driving on the road in order to gain that key terrain. This will help the force ready to spearhead with tanks ...T-80s and T-90s," Rutter told TNI.

Russian ground forces are likely to leverage support from Russia's considerable arsenal of short and medium-range ballistic missiles to fortify a ground advance with long-range fire.

"The thing to watch in the future is to take a look at the ballistic missiles, tactical ballistic missiles, and how the operational echelon moves forward. Obviously, [Russian president Vladimir] Putin has the tactical echelons moving forward with artillery and not a lot of air defense, probably but supplementing that with additional resources in order to gain fire superiority," Rutter said.

Without a large, heavy mechanized force to confront advancing Russian mechanized units, the Ukrainian military will need to embrace different kinds of tactics, which Rutter said will need to rely on much more than Javelin Anti-Tank Missiles. Rutter's unit used Javelins against Iraqi armor, and while the weapons are effective at destroying tanks, a successful Ukrainian defense against invading Russian forces will need to utilize other elements as well.

"We actually had the Javelin during the assault of the Republican Guard at the airport. It’s a very, very effective weapon system, but like any weapon system going against combined arms maneuver ... it has to be enhanced with artillery and it has to be enhanced with minefields. Javelin on its own, against a penetrating Russian force, may be doomed for failure, it needs to be combined with artillery, and even close air support," Rutter said.

Along with Javelins, mine-fields, artillery, and some infantry, Ukrainians will likely use targeted tactics such as seeking to defend key intersections and crosspoints vital to any Russian advance.