Which Asia Pacific Nation Purchased a Secret Batch of Kalashnikovs? 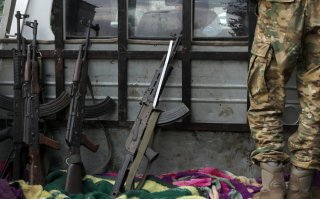 An undisclosed nation in the "Asia Pacific Region" has reportedly placed a large order with the Russian-based Kalashnikov Concern, the AK-series small arms manufacturer. According to a report from TASS, a Russian state-run news outlet, the Russian arms maker has fulfilled a large order of automatic rifles for a foreign client. However, the company didn’t disclose which nation would receive the shipment.

"A large batch for automatic rifles was produced on an expedited basis at the Kalashnikov Concern in the interest of a foreign client in the Asia Pacific Region within the contract, signed by Rosoboronexport (a Rostec subsidiary)," said Kalashnikov’s press office in a statement on Tuesday.

According to the press office, the company increased its export production by more than 70 percent in 2021.

"Foreign clients always praise [its] reliability and specifications," Lepin said in a statement. "It is proven by the positive export dynamic, despite the complicated conditions that we have to work in—I am talking about the pandemic and the sanctions."

Who is the Foreign Buyer?

Kalashnikov Concern did not specify which country may receive the rifles, but it isn't too hard to narrow it down to a few possible contenders. South Korea, Japan, Taiwan, Thailand, Singapore, and the Philippines are unlikely buyers, so those countries can be taken off the list.

Although India recently completed a deal with Russia to produce the AK-203 domestically, New Delhi has also announced other arms deals that suggest they are not the buyer. Moreover, China also has its own domestic arms industry and is a small arms exporter, so China isn't a likely buyer either.

That would leave just a handful of nations, including Cambodia, Laos, Vietnam, Indonesia, Malaysia, and North Korea. Of those nations on the shortlist, North Korea could be the most likely contender. Last month, China and Russia delayed an American effort at the United Nations to impose sanctions on five North Koreans in response to Pyongyang’s missile launches.

Moscow's sale of weapons to North Korea could also be a way of stirring up a bit of trouble and showing the West that sanctions hold little weight in today's power dynamics.

Whoever the buyer of the weapons may be, it is just one of many deals for the Russian arms industry. The Kalashnikov Concern is Russia's largest producer of small arms, and it currently accounts for about 95 percent of the Russian arms market. Notable products include the Kalashnikov (AK) assault rifle series, the RPK light machine gun series, the Dragunov SVD semi-automatic sniper rifle, the SKS semi-automatic carbine, and the Makarov PM pistol. Despite the company's name, it was not founded by AK-47 designer Mikhail Kalashnikov, but rather by Tsar Alexander I in 1807.