White House Disputes How Much Military Equipment the Taliban Seized 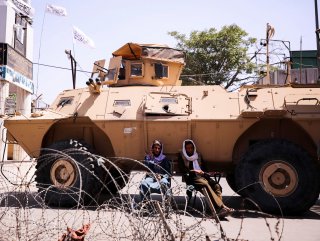 The top White House spokesperson said on Monday that the Biden administration’s objective was never to leave equipment behind in Afghanistan that could fall into the hands of the Taliban as U.S. forces pulled out of the country this month. However, White House press secretary Jen Psaki said that the billions of dollars in military equipment was originally given to the Afghan government, and that the United States had taken steps to “reduce the amount” that might fall into the insurgent’s hands.

“We had to make an assessment several weeks ago about whether we provide materials to the Afghan National Security Forces so that they could fight the fight,” Psaki stated on Monday. “Obviously, they decided not to fight, and we made the decision to provide them with that equipment and the material. We have not assessed that any group on the ground, whether it’s ISIS-K or the Taliban, has the ability to attack the United States.”

U.S. Gen. Frank McKenzie, commander of the U.S. Central Command, told reporters on Monday that the only usable equipment left behind at Kabul’s Hamid Karzai International Airport was machinery that could be used to return the airport to civilian operation as soon as possible.

The rest of the equipment said Gen. McKenzie was destroyed or otherwise “demilitarized.” Among the equipment reported to have been left behind included seventy mine-resistant ambush-protected vehicles, twenty-seven Humvees, seventy-three aircraft, as well as an unspecified number of counter-rocket, artillery, and mortar systems. It wasn’t clear what was done to the equipment but the CENTCOM chief added that those vehicles will “never be able to be operated by anyone again.”

Rep. Jim Banks (R-Indiana), who is chairman of the Republican Study Committee and who from 2014 to 2015 took a leave of absence from the Indiana State Senate to serve a deployment in Afghanistan as a U.S. Navy Reserve supply corps officer, had put an estimate on the value of the equipment left behind at $85 billion.

While the exact number remains disputed, the destroyed equipment will still serve as trophies for the Taliban, while vast quantities of small arms and infantry gear will also provide legitimate tactical value to the insurgent force. The greater danger however is that the vast quantities of material won’t be used just by the Taliban but could supply other terrorist groups throughout the region.

“Our objective was not to leave them with any equipment, but that is not always an option when you are looking to retrograde and move out of a war zone,” Psaki added. "We are not going to do anything that’s going to allow terrorists to grow or prosper in Afghanistan or any terrorist organization. That continues to be the president’s commitment, and his order to his U.S. military over the past several days and the actions that CENTCOM have announced show that he’s going to deliver on that promise."

America’s longest war may not be over, but what comes next for Afghanistan is uncertain – made more so by the vast quantities of hardware left behind.