Whose Double Standards? Racism and the Ukrainian Refugee Crisis 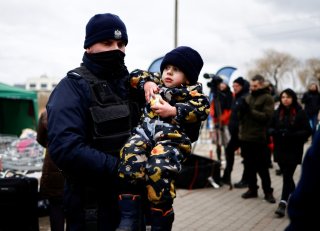 Since the start of Russia’s invasion of Ukraine, the European Union and specifically Hungary and Poland have been accused of applying racist double standards to the treatment of Middle Eastern and African refugees at their borders. These allegations, however, miss basic facts.

When Russian bombs started falling on Ukraine, hundreds of thousands of Middle Eastern, African, and Asian nationals—among them 20,000 Indians—were studying or working in the embattled country, a large number of whom decided to flee at the onset of the conflict. During a humanitarian disaster unparalleled in Europe since the end of World War II, involving 5 million refugees and 7 million internally displaced people, some kind of misconduct or malpractice by authorities is unfortunately inevitable. Indeed, during the opening days of the conflict, there were reports of racial discrimination, notably African students allegedly being thrown off trains in Ukraine and being prevented from crossing into Poland.

But is systemic racial discrimination happening at the external borders of the EU? It is true that Ukrainian nationals can cross into the EU much easier than African nationals, but this is due to simple administrative reasons. Since 2017, Ukrainians with a valid biometric passport can enter and stay in the Schengen area for up to ninety days without a visa, which significantly speeds up their admission as refugees into the EU. In contrast, nationals of third countries—lacking a visa to the Schengen area—fleeing the invasion have to go through a registration process at the border, which usually involves an interview, national security screening, and the issuance of a temporary residence permit. The frustration of African students waiting at the EU border to be registered watching white Ukrainians waved through without delay is understandable, but it has nothing to do with racism. The abovementioned extra mechanisms ensure the protection of the external borders of the EU, and they are indispensable even during a refugee crisis.

These mechanisms, however, are also in place to protect third-country nationals fleeing the conflict. A large number of Ukrainian refugees didn’t really need substantial help from the countries receiving them because they already had friends and family in the EU whom they could rely on. This was not the case for most third-country nationals fleeing the war. Upon entering the Schengen area, they usually found themselves in a vacuum, and it was during these registration mechanisms that they learned about their options and could request a stay in the EU or ask for help to return home.

And most of them did ask for help. During the first ten days of the conflict, EU countries scrambled to help evacuate 18,000 Indians, with Hungary alone assisting more than 6,000. Consequently, it is no surprise that Indian prime minister Narendra Modi thanked Budapest for its efforts to help Indian nationals fleeing the war. Moreover, Hungary helped to provide accommodations for Somali as well as Bangladeshi students, even offering them the chance to continue their studies at Hungarian universities. These actions are anything but racist.

Double standards do exist regarding the Ukrainian refugee crisis, they are just not the alleged ones that the Western press has been writing about. The Russian invasion precipitated a significant global rearrangement in the distribution of forcefully displaced people (DP). In 2020 86 percent of DPs lived in the developing world, their care putting serious strain on the resources of usually low-income countries. These havens have frequently asked for assistance from the developed world, with high-income states rushing to their help most of the time. The top ten donor countries of the United Nations High Commissioner for Refugees in 2021 were all Western states, contributing more than $4.7 billion to the global refugee effort. Now caring for the 12 million Ukrainian DPs seems to fall almost exclusively on the shoulders of Europe and the United States.

Asking for financial aid from developing nations would obviously not be fair, but there are other, more symbolic ways to show support, that many countries refused to do; a number of African countries have even openly backed the Russian invasion. When the UN General Assembly voted on April 7 to suspend Russia from the Human Rights Council, twenty-four countries voted against the measure, including Algeria, Burundi, the Central African Republic, Congo, Eritrea, Ethiopia, Gabon, Mali, and Zimbabwe, with several other African countries abstaining. Isn’t this the double standard we should be talking about?

Viktor Marsai is the Research Director of the Budapest-based Migration Research Institute.

Kristof Gyorgy Veres is the Andrassy National Security Fellow at the Center for Immigration Studies as well as Senior Researcher at the Budapest-based Migration Research Institute.