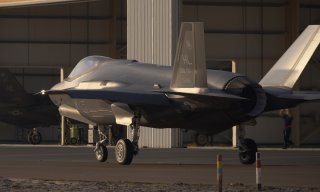 “There’s no question that everyone involved ― certainly Lockheed Martin ― could be doing a better job on getting sustainment costs down,” said Smith, in comments made to the Defense Writers Group.  “The sustainment costs ― and it varies, I understand they’re as high as $38,000 an hour, and that is incredibly expensive ― it’ll make the plane so that you don’t really want to operate it any more than you absolutely have to.”

The Washington Congressman has been a consistent, if not always accurate, critic of the F-35 program. Earlier this year, Smith called the Lightning II a “rathole” and seemingly urged the government to divest from the program as soon as possible. Smith has qualified his prior remarks somewhat, noting that the F-35 is “part of our future no matter what.” But, he added, “for [the F-35] to be effective, we’ve got to get those costs under control, and we’ve got to find ways to incentivize ― and I know it’s not just Lockheed.”

Smith floated the idea of threatening to cut F-35 orders in favor of other acquisition programs if Lockheed cannot reduce lifecycle costs, as well as barring underperforming contractors from taking part in future projects. “The NGAD is a pretty good way to incentivize it: you know, if you screw us on this contract, then we ain’t giving you the next one,” Smith said. “There are a bunch of different ways to work it, but I want to be as creative as possible about incentivizing competition and incentivizing all of our contractors to give us the best deal possible.”

Next Generation Air Dominance (NGAD) is an ongoing sixth-generation air superiority fighter project aimed at eventually phasing out the F-22, not the F-35. The F-15EX has been touted as a possible replacement to the F-35, but, as previously explained by The National Interest, Boeing’s fourth-generation fighter simply cannot compete with the performance and capabilities of the F-35 and would get destroyed by Chinese and Russian air defenses in a war. The Washington Post reported earlier this year that Adam Smith’s Seattle-area district “depends heavily on Boeing for jobs and investment,” and the latter has been among the top donors to his campaign committee according to Ballotpedia.

Smith’s deliberately worded statement on the F-35’s sustainment costs is factual in the most narrow sense but obfuscates more than it reveals about the fighter’s actual costs. It is true that some older models of certain F-35 lots can have sustainment costs “as high as $38,000 an hour,” but this does not reflect the reality of the F-35 program as it exists today. In 2017, the F-35A had a cost per flight hour of roughly $47,000. The latest F-35A lots are registering sustainment costs of about $33,000, which puts the Lightning II within striking range of most currently-serving F-15 models— an incredibly impressive feat, considering that the F-15 platform has benefited from over 45 years of logistics, supply chain, and production optimizations. How can anyone complain about costs—when actually understanding the historical context? The F-35 is the world’s most state-of-the-art fighter, and considering that fact alone, the costs are actually low when compared to a sub-par and older F-15—even if massively upgraded.

From here, there is more that F-35 critics somehow miss. The F-35 program’s sustainment outlays have sharply declined over the past four years, a clear sign that the fighter is heading in an increasingly sustainable direction. Despite the undeniable progress that has already been made, Lockheed agrees with the Air Force and some in Congress that there is more work to be done— through further logistics optimizations, the company seeks to slash the F-35’s sustainment cost all the way down to $25,000 by 2025. “Over the last five years, we’ve reduced the operating costs by 40%,” Lockheed’s F-35 sustainment vice-president Ken Merchant said. “We’re predicting that we can take another 40% out of that Lockheed-controlled cost, which is about 39% of the cost per flying hour.”

The debate over the F-35’s costs often overlooks the Lightning II’s continued success in a saturated export market that would otherwise be dominated by British and European products. Switzerland became the latest F-35 customer earlier today, selecting the fighter as the winner of a $6.5 billion procurement competition that included the Eurofighter Typhoon, Dassault Rafale, and Boeing’s F/A-18E/F Super Hornet. The F-35 program has garnered as many as 15 foreign partners, supporting the growth of economies of scale that can further reduce the plane’s already competitive flyaway cost of $79.2M as of production Lot 14. Here, too, the long-term trend speaks for itself: the fighter’s Lot 1 production batch cost around two hundred million dollars, with Lot 5 costing around $100 million per model. The F-35’s detractors are seldom willing to dwell on the topic of flyaway costs, not least because the competing F-15EX’s typically-quoted cost of around $85-90 million asks taxpayers to shell out more money for substantially lower capabilities.

As with any ambitious next-generation fighter program, the Lightning II was not without its growing pains—and that should be expected. But Lockheed has made major strides in reducing the F-35’s costs across the board, proving to skeptics that the plane is firmly on a downward cost trajectory. As the program matures and expands into the coming decades with future block revisions, still more cost reductions are likely to follow.

To mothball or outright abandon all the development and optimization progress made up to this point, as some of the program’s critics are suggesting, would be to throw the baby out with the bathwater. And the only winners in that scenario would be China and Russia, as their air defense platforms would blow even the most advanced F-15 fighter out of the sky.