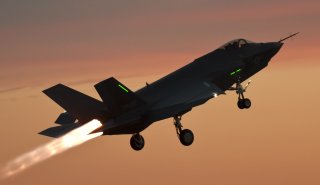 Boeing’s F-15EX is among the U.S. Air Force’s (USAF’s) latest procurements, with the service moving forward with plans to purchase as many as 144 units through the mid-2030s. But how does the F-15EX stack up against USAF’s other major acquisition, the F-35 fifth-generation fighter?

The F-15EX is an advanced development of the F-15E Strike Eagle strike fighter, bringing an enhanced radar, new avionics, and revised cockpit display. But in spite of these salient updates, the F-15EX can never fully escape its fourth-generation roots— the fighter is based on a 45-year old airframe, with all of the performance drawbacks that entails. The designers can update some of the plane’s onboard features, but they cannot change the fact that its construction, coating, shape, and armament configuration is simply not stealthy, making it what Heritage Senior Research Fellow John Venable described as a “homing beacon” for next-generation Russian and Chinese air defense systems.

It was revealed in March that the Pentagon decided to waive survivability testing for the F-15EX. The government is citing cost and time savings, but the decision will do little to assuage the growing concerns of critics who argue that the F-15X lacks the survivability to overcome either Russia’s echeloned missile and air defenses, or China’s sophisticated anti-access, area-denial (A2/AD) network in the Pacific. This gaping vulnerability will be further exacerbated as more F-15EX’s enter service over the coming decades, only to be threatened by cutting-edge missile systems like Russia’s upcoming S-500 Triumfator-M. Boasting the latest advancements in detection, tracking, and targeting technologies, these new weapons can and will restrict the ability of fourth-generation fighters like the F-15EX to operate effectively in contested airspace. By stark contrast, the F-35 Lightning II is among the stealthiest fighters in its category. With a radar cross-section (RCS) comparable to that of a metal golf ball and a class-leading electronic countermeasures (ECM) suite, the F-35 is one of few fighters in USAF’s current inventory with the survivability to spearhead penetration missions deep into enemy airspace.

But what about armaments? It is true that the F-15EX can carry an impressive twenty-two onboard air-to-air missiles, but, as noted above, a large payload capacity is irrelevant if the fighter can’t survive long enough to make use of it. Further still, it seems exceedingly unlikely that the F-15EX would find itself in a position to accomplish a meaningful battlefield goal through unloading all of these missiles in a single sortie. The F-35 can carry up to sixteen air-to-air missiles by fully leveraging its external hardpoints in what is sometimes called the fighter’s “beast mode” configuration, which should still be more than enough to accomplish virtually any real-world mission. Unlike the F-15EX, the F-35 also offers the operational versatility of a “first day of war” internal armament configuration, trading some of its payload capacity in exchange for maximized stealth performance. Beyond raw aerodynamic performance, the F-35 offers a whole other dimension of tactical value through sensor fusion— namely, its ability to act as a force multiplier by using its onboard sensors to generate a dynamic picture of the battlefield that can be fed to nearby friendly units. The F-15EX offers nothing by way of similar capabilities.

A side-by-side comparison between these two aircraft leaves no room for ambiguity as to which is the better choice for countering the increasingly sophisticated threats posed by America’s great-power competitors. Though it is a capable fourth-generation fighter in its own right, the F-15EX simply cannot keep pace with the next-generation design, avionics, and offensive capabilities of the F-35.