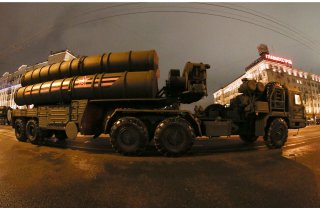 Russia’s defense industry seeks to build on its prior successes with a new round of ambitious export contracts for the S-400 missile system.

Earlier this week, Russian specialists took some eighty military envoys from fifty-two countries to the Ashuluk proving ground in the Astrakhan region of southwestern Russia. There, participants were given a live demonstration of Russia’s S-400 “Triumf” missile defense system and the Pantsir-S short-range surface-to-air missile system (SAM). “The officers of foreign states were shown the combat capabilities of S-400 ‘Triumf’ long-range surface-to-air missile systems and also Pantsir-S anti-aircraft missile/gun launchers for detecting and eliminating practice aerial targets," read a press statement from Russia’s Defense Ministry accompanying the event. A list of attendees was not provided, though the Kremlin noted that the event drew envoys from the former Soviet sphere, Asia, Africa, Europe, and Latin America.

The S-400 is Russia’s flagship missile defense system, leveraging its diverse suite of compatible missiles and advanced tracking features to offer effective performance in a wide range of combat situations. The system can operate from short to very long ranges and can target manned aircraft, some types of drones, cruise missiles, and ballistic missiles at a range of up to four hundred kilometers. Pantsir is a family of short-range SAMs, with the baseline Pantsir S-1 unit capable of striking targets at a range of twenty kilometers and an altitude of fifteen kilometers.

“The combat teams of S-400 surface-to-air missile systems and Pantsir-S anti-aircraft missile/gun launchers spotted and eliminated all the target missiles that simulated aerodynamic, operational-tactical and tactical ballistic targets, cruise missiles and also ground targets," the statement continued. Moscow decided to demonstrate these two systems together, in part, because that kind of usage is closer to the force composition one might see in a real combat scenario. As formidable as the S-400 is, it is not meant to operate alone; rather, it is but one part of a larger, echeloned network of varied missile systems that work in tandem to offset each other’s weaknesses, providing overlapping layers of missile/air defenses and mitigating the effectiveness of enemy saturation strikes.

The Kremlin has hosted similar events in recent years. The Defense Ministry noted that this latest event is “a planned measure that is being held to raise the transparency of the Russian Army’s activity.” It also serves as an advertisement of Russian military hardware, giving foreign envoys first-hand exposure to the weapons Moscow seeks to sell globally. Customers who have purchased the S-400 system include such high-profile weapons importers as China, India, and Turkey. Earlier this year, Ankara noted its interest in procuring another S-400 regiment, potentially as part of a larger joint production deal with Moscow. Washington has sought to curb the proliferation of such Russian weapons, such as the S-400 system, through the “Countering America’s Adversaries Through Sanctions Act” (CAATSA). A new round of sanctions to punish Ankara over its S-400 acquisition came into effect in early April, following Turkey’s ejection from the F-35 stealth fighter jet program. Beijing has likewise been slapped with CAATSA sanctions following its S-400 purchase, but, fearing a rift in US-Indian relations, Washington has been hesitant to levy similar punishments on New Delhi.