The Difficult Task of Exploiting Cracks in the Russia-China Relationship 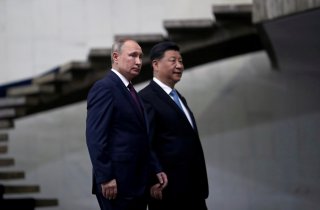 The U.S.-Russia summit in Switzerland concluded on Wednesday with far fewer accusations and less finger-pointing than the U.S.-China summit in Alaska in March. But despite the more positive personal tone by both President Joe Biden and Russian president Vladimir Putin, the results will not change the broader and more negative sentiment in both Moscow and Beijing towards Washington.

Russia and China maintain a mutual desire to weaken the U.S.-led global order, an effort bolstered by their own trade deals, military cooperation, and diplomatic support, as well as the shared belief that the West is preoccupied with domestic divisions. There is little momentum or motive to alter that increasing vergence of views.

Understanding where and why the Chinese-Russian relationship is strengthening is critical to revealing the cracks in it—and at least the potential to exploit those.

Moscow and Beijing have put great effort into promoting the idea of a wider partnership. Chinese president Xi Jinping has described Putin as his best friend, and the two countries have described the current state of their relations as “the best in history.” In a recent interview with The Global Times, Russian ambassador to China, Andrey Denisov, stated that if the United States and Russia discussed issues related to China during the Biden Putin summit, Russia would inform the Chinese, and conveyed that Russia-China relations would not change no matter the attitude of the United States towards Russia. In late 2020, Xi declared that by strengthening their strategic cooperation, “China and Russia can effectively resist any attempt to suppress and divide the two countries.”

Both countries are threatened more by internal democratic revolution than by either’s brand of authoritarianism. Russia’s arrest of Alexei Navalny and China’s imprisonment of Hong Kong democratic figures such as Jimmy Lai have been symbolic displays of resistance to the West’s promotion of liberal democracy abroad.

So it may be that after decades of the West over-estimating the robustness of the relationship of the two leading Communist powers in the second half of the twentieth century, the risk now is underestimating its combined strength under two such determined autocrats in the twenty-first century.

In 2018, the Russian-China trade eclipsed $100 billion for the first time, and the two countries plan to increase that to $200 billion by 2024. China’s exports to Russia largely come in the form of machinery and electronics, while Russia’s large energy reserves have helped meet the demand of China’s large and growing economy. Their mutual border allows Russian energy to bypass U.S.-controlled sea lanes, making it a popular alternative to other sources of energy overseas. China, now Russia’s most important energy export destination, is crucial to Moscow’s attempts to prove to European countries it has other export options.

In 2019, Putin and Xi declared their intention to reduce the dominance of the U.S. dollar in international trade, and since 2020, most of their trade has been through the Russian Ruble, Chinese Renminbi, or Euros. Particularly for Russia, this will help dampen the effectiveness of U.S. economic sanctions.

Russia’s sales of military equipment to China have also helped the latter in its quest to become a major military power. A growing supply of Russian-made jet fighters, submarines, air defense systems and more have helped China grow more assertive in the Asia-Pacific region and bridge the gap in Chinese-U.S. military capabilities.

Russia’s defense industry has benefited from supplying a huge and hungry Chinese market, after losing much of its East European clientele after the Cold War. In addition, Chinese troops traditionally join Russian military parades in Moscow, alongside joint military exercises on land and in the Baltic Sea and Pacific and Indian oceans. Joint bomber patrols over the Sea of Japan are further demonstrations of Russia and China’s willingness to form a united front to the United States’ global military presence.

Moscow and Beijing have also provided wider support to one another on the world stage. As permanent members of the UN security council, their veto power helps balance against the other three Western powers, and they have consistently struck down attempts or abstained from voting to condemn their behavior at the UN.

In addition, Russian and Chinese backing—in both diplomatic and military form—for countries like Syria, Iran, Venezuela, Sudan, North Korea and other “rogue states” has consistently undermined US efforts to isolate or weaken those regimes. Their united autocratic front has legitimized strongman rule domestically and worldwide while eroding the viability of the liberal democratic world order.

Yet for the duration of the short-lived Sino-Soviet partnership during the first half of the Cold War, China was the junior partner. In the new Moscow-Beijing partnership, that has switched, and Russia knows it. In fact, the Chinese-Russian bilateral relationship only normalized because of this power shift. China sees itself as expanding and assuming its rightful position at the top of the global order. Russia is a revisionist power, seeking to restore its strength and sphere of influence after the collapse of its historical empire thirty years ago.

Because of the power imbalance and their similar search for expansion in limited space, there are natural areas of tension simmering under the level of cooperation between Russia and China.

The power vacuum that will occur in Afghanistan with the departure of NATO forces (even with the continual presence of private military companies) will add to the competition between Russia and China in Central Asia. While Russia maintains military dominance in the region, China’s economic investment in the five former Central Asian Soviet states (particularly through developing their energy industries) has eroded Russia’s traditional regional influence and monopoly over local energy infrastructure. China has also attempted to attach Belarus and Ukraine to its Belt and Road Initiative and other economic agreements, to the largely silent disapproval of Moscow.

As China’s power has grown, there has also been significant competition for influence between Moscow and Beijing in rogue states. China’s developing domestic weapons industry, for example, has not only slowed Russian imports to China, but has begun to encroach on Russian market share overseas. Finally, increased Chinese investment and immigration in Russia’s Far East has added to the historical vulnerability of Russia’s small population and port of Vladivostok – the Kremlin’s gateway to projecting influence in the Pacific.

Russia and China will see through any attempt to divide them and are particularly sensitive to ensuring their differences are not aired in public. Beijing is also acutely aware that a United States that belatedly regards China as its most threatening strategic competitor will be willing to do more to woo Russia as a way of weaning it away from China’s embrace. This can only happen if Russia is offered terms that suit its own national interest—including freezing Ukraine’s EU and particularly NATO membership aspirations and easing sanctions over time.