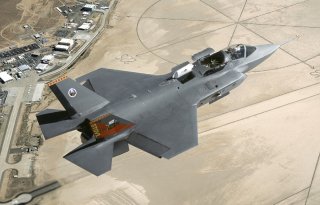 The United States Air Force faces a crucial juncture regarding the F-35 Joint Strike Fighter. Anyone watching the news over recent months could not miss the high-velocity onslaught against the program. Whether it was House Armed Services Chairman Adam Smith referring to the 5th generation fighter as a “rathole” or news headlines saying the aircraft “has failed,” the message was incredibly aggressive and caustic. The program is still experiencing its fair share of challenges, especially when it comes to software updates, the engine, and sustainment costs. However, such challenges pale in comparison to the accomplishments the aircraft are demonstrating each and every day they fly. Defense acquisition programs—particularly those adopting advanced technologies in new ways—are always riddled with challenges. To cast the F-35 as a failure is a massive inaccuracy. However, optics matter—especially when Congress is involved—and it is crucial that the Air Force regain control of the debate by interjecting real data, not alarmist conjecture. The reality is that the nation needs the F-35 and backing off the program now would present exceedingly dangerous risk.

Derision of the latest combat aircraft on the part of a vocal minority is a long-practiced tradition. One can look back at the early days of now-legendary types like the B-52, F-15, F-16, B-1, and C-17 and find sensationalist stories filled with doom and gloom. Aircraft innovation demands pushing the limits of technology to address tomorrow’s challenges. This invariably drives trial-by-error discovery, cost growth, and schedule delays—the fodder for attack by competing entities. The pattern is clear: deride the program as unnecessary, unfixable, and too expensive. Then recommend canceling the program in question, extending the life of existing aircraft, or buying more low-cost, less capable aircraft.

Here is the problem with that kind of thinking: it flies in the face of security requirements, economic common sense, and historic lessons learned. First and foremost, it is important to recognize that the global security environment is not controlled by the United States. Adversaries have a vote. Russia’s invasion of Ukraine and the rapid rise of ISIS in 2014, along with China’s increasingly aggressive actions in the Pacific stand as proof. The United States must defend its interests, or risk severe consequences. The growth in the capability and capacity of modern threats requires the capabilities resident in the F-35, and that it be purchased in sufficient quantities.

If naysayers get their way and programs are cancelled or dramatically curtailed, then billions in development, testing, and early production will be wasted. Costs will compile extending the lives of older, less capable aircraft. With security requirements growing, the Air Force will invariably have to double back to launch a new program to fill the void. This is exactly what happened to the B-2. The nation only bought 21, not the 132 planned. Same for the F-22, with just 187 procured, not the 386 as stipulated by the validated military requirement. In both cases, the shortfall persisted, and the service had to launch new programs to fill the void, in this case, the B-21 and Next Generation Air Dominance (NGAD) fighter. This pattern must stop. Investing billions in the front end of a program but failing to realize planned capacity is both strategically shortsighted and economically unsound. How many people build a house, but abandon it because they do not want to deal with last-minute cost growth and schedule delays? The answer is obvious, no one. If the requirement remains valid, taking advantage of sunk cost, pushing through the inevitable development challenges, and buying in volume is the commonsense approach. This is what made the Reagan-era build-up so effective. The services gained forward-leaning capability and significant capacity—investments we still depend upon 40 years later.

Over the past 30 years, the Air Force was forced to cut planned modernization of its aircraft due to shortsighted calls for a peace dividend post- Cold War, the ground-centric focus precipitated by Afghanistan and Iraq, and fiscal shortfalls yielded by the Budget Control Act. As a result the service now finds itself with the smallest, oldest aircraft fleet in its history at a time when demand for those forces is surging. The only way to address this challenge is by doubling down on the programs that are in production today—the F-35, B-21, KC-46, T-7, MH-139, MQ-9, GBSD, and more.

The Air Force has to get healthy and that is best done with today’s solutions. An undue focus on “program next,” will result in billions spent and operational capacity never realized. That means combat commanders robbed of necessary capability and airmen stretched to the breaking point flying increasingly geriatric aircraft.

Those critical of the F-35 need to spend some time weighing the Air Force’s options. First and foremost, the spectrum of air combat missions performed by the aircraft provide non-negotiable conditions required for any successful military operation. Ships at sea, forces on the ground, space control centers, logistics lines, and operating bases are simply non-survivable if subject to concerted attacks from the sky. Questioning whether the Air Force needs modern fighter aircraft to fulfill these missions miss this key reality. While the Navy and Marine Corps possess fighters, their inventories lack the Air Force’s scale, theater-wide and global perspective, and are insufficient to meet the nation’s combatant commander’s demand.

While some may be concerned that the Air Force’s future fighter force will be increasingly dependent upon the F-35, they need to recognize this was a decision made in 2009 by leaders in the Department of Defense and Congress, not the service, when they truncated the F-22 production line at 187 aircraft—half the stated requirement.

Even though older designs, like the F-15 and F-16, are still in production, they lack the performance attributes necessary to survive in the modern combat environment: stealth, electronic warfare prowess, and information dominance. This set of attributes is solely possessed by 5th generation technology aircraft. Today only 20 percent of the Air Force fighter force is 5th generation. Stealth and electronic warfare capabilities combine to radically degrade an enemy’s ability to target the aircraft. Sensors, processing power, and connectivity to the broader force provide crucial situational awareness that allows the aircraft to understand the battlespace in real-time. Miss any of these capabilities and the aircraft in question are at extreme risk of getting shot down. That is why the F-117 first-generation stealth fighter was retired—it lacked the information and electronic warfare capabilities required in the modern battle space. It is also why even improved versions of the F-15 and F-16 are not smart choices. Even through they have been modified with modern information and electronic warfare attributes, they will never be stealthy. As such, they represent an expensive way of getting shot down—especially given that an F-35A’s acquisition price now falls below that of a new-build F-15. That is why former Chief of Staff of the Air Force General David Goldfein explained in 2019 congressional testimony, “…if we ever get to a point where we are trading F-15s for F-35s, that is a bad choice. The F-15 is not an F-35, it will never be an F-35.” Leaders need to keep this in mind as topline defense budget pressures will drive difficult decisions.

While the Air Force is pursuing new fighter solutions via the next-generation air dominance (NGAD) program, this option will not be available in operationally relevant quantities for at least a decade—if then. The B-21 program provides a useful yardstick in this regard. The Air Force selected the winning design in 2016, but it has yet to fly, and will not be fielded in volume till the 2030s. The B-21 and the NGAD will be fantastic aircraft. However, designing, developing, testing, producing, and fielding new combat planes takes time. Those arguing that the F-35 should be cancelled and NGAD be accelerated as the solution simply do not appreciate this reality. The Air Force’s current fighter force is primarily comprised of aircraft designed over fifty years ago and purchased in the Reagan Administration. They are worn out and do not possess the necessary capabilities to fight, survive, and win in modern threat environments.

Consider what happened during Operation Inherent Resolve in Syria, which is far short of a high-end campaign. The Russians moved advanced surface-to-air missiles into the region. All of a sudden, any aircraft lacking the combined attributes of stealth, electronic warfare, and information dominance was at extreme risk. The older designs could only continue flying combat missions because the Russians chose not to shoot. That is an unacceptable risk and F-35 skeptics need to recognize that when they call for the program’s cancellation. They are effectively seeking to cede a crucial advantage by failing to equip airmen with the tools they require to successfully accomplish their missions.

Taking all of these points into consideration, the Air Force has no choice but to double down on the F-35. The mission is essential. The current fighter inventory demands a reset. Lower tech options available are simply not viable given the threat environment and new solutions that may prove incredibly valuable in the future simply will not be available soon enough. Add this to it as well: while the F-35 may be experiencing specific technical problems, these are all solvable. Every combat aircraft that came before the F-35 experienced similar issues. There was a point in the 1970s when half the F-15 fleet was grounded due to engine issues and F-16s were crashing with alarming regularity. The problems were identified, solutions implemented, and the programs succeeded. Working this sort of common-sense path forward is the most cost-effective, fastest option available to the Air Force. Is it frustrating? Of course. Is it manageable? Yes. That is precisely why the Air Force needs to regain control of the narrative surrounding the F-35. Left unabated, highly misinformed conjectures risk shooting it down in the political realm—an outcome America’s security interests cannot afford.