The Media Is Flat-Out Wrong: The U.S. Military Needs the F-35 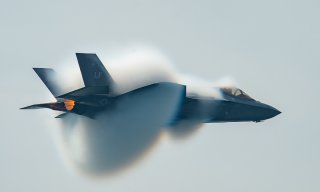 Every few years or so, national media rediscover that the F-35 fighter is the Pentagon’s costliest weapons program.

What follows with herdlike predictability is a feeding frenzy of misinformation that undermines support for what is actually a highly successful program.

The misinformation usually begins with the fighter’s price tag.

My favorite recent example is the lead sentence of a CNBC story on the MSN website, which stated, “The Pentagon is under pressure from U.S. lawmakers over how it will pay for the F-35 fighter jet, which has cost more than $1.5 trillion so far.”

Perhaps prime contractor Lockheed Martin should be relieved that the nation’s leading cable-news business outlet only overstated the cost to date by about 1000%.

The latest official estimate for what it will cost to develop and produce 2,470 F-35s is $398 billion in then-year dollars, but most of that money hasn’t been spent yet.

Once the critics establish that the F-35 is outrageously, inexcusably overpriced—the most common variant actually costs less than the list price of any commercial jetliner on the market—they then move on to other imaginary defects in the program.

One frequently heard refrain is that, nearly 20 years after the contract was first awarded to Lockheed, the fighter still isn’t in full-rate production.

This may come as a surprise to those who realize that over 600 of the fighters have been delivered and ten military services around the world are currently operating it.

The reason F-35 hasn’t officially entered full-rate production is because that requires it to perform successfully against Chinese and Russian fighters in a complex simulation run by the government.

Unfortunately, the global pandemic slowed plans to conduct the necessary tests using what is called the Joint Simulation Environment.

Until the simulations are performed and the results are analyzed, a full-rate designation cannot be conferred on the program.

But there isn’t much doubt what the simulations will reveal. The F-35 has been defeating adversary aircraft in joint exercises at a rate of better than 20-to-1 for years, and the adversary aircraft are configured to mimic the performance of high-end enemies.

So whatever the bureaucratic jargon may imply, F-35 has been in high-rate production for some time, and that effort is going well.

A few production aircraft were sacrificed last year to measures needed to protect the workforce from Covid-19, but Lockheed expects to catch up with where it wanted to be fairly quickly.

Any critic who complains that F-35 isn’t in full-rate production without explaining that the problem is caused by a delay in government testing rather than a program deficiency is spreading misinformation.

There is no real problem with the program’s performance. Each of the three fighter variants built for the Air Force, Navy, and Marine Corps performs the missions for which they were designed several times more effective than the legacy aircraft they will replace.

The only real issue the single-engine F-35 faces today is that it costs about as much to operate per hour as twin-engine F-15 air superiority fighters leftover from the Cold War.

But the cost per flight hour fell 23% over the last four years, and it will continue falling as the fighter matures.

Even if it didn’t, F-35 has already proven it is more lethal, versatile, and survivable than any fighter that came before. It is worth the higher cost of operation for what it can achieve.

It has to be. Cold War-fighters would be no match for the fighters Russia and China are fielding today.