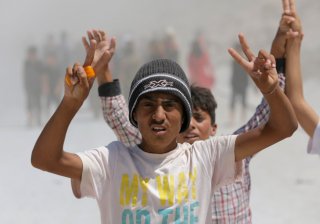 When I recently visited Halabja, Iraqi Kurdistan, I saw empty streets that once bustled with youngsters. Yet these empty streets are keeping politicians busy from Washington to Minsk, as recently more than 4,000 refugees crossed the Belarusian border into the European Union.

No longer is football or school discussed among Iraqi Kurdish youth; Chit-chat is now almost exclusively focused on leaving for Europe. On November 8, more than fifty youth left Hajiawa, a city of fewer than 15,000 people. Mass immigration is a striking feature of today’s Iraq at a time of relative peace.

When I warned a seventeen-year-old from Halabja, a city that was chemically bombarded in 1988, that his road ahead was filled with risks, he replied “even if I know I will die on the way, I don’t want to die here.” The mass departure of youth from the city reminds one of when it was razed to the ground three decades ago. Halabja is one of the few dying cities as its population shrinks due to migration.

Kurdish immigrants came to the world’s attention when thousands of refugees began crossing the Belarusian border into Poland, sparking a new crisis on the European Union’s eastern border. Polish authorities responded by deploying 15,000 troops on the Belarusian border. Polish prime minister Mateusz Morawiecki wrote on Facebook: “The border of the Republic of Poland is not just a line on a map. It is sacred -- the blood of Poles was split over generations to protect it!” Iraqi migrants appear to be reigniting ancient rivalries in Europe.

The United States and the European Union have accused Belarus of weaponizing these immigrants. Since June 2021, Belarus has facilitated visa requirements for Iraqi citizens, streamlining a once-arduous process for thousands of migrants who flew to the country and have been living in forested areas without food and shelter. Through its creation of an artificial refugee crisis, Minsk has both diverted the world’s attention from its domestic affairs and retaliated against sanctions imposed on it by Brussels. And, once again, Kurds have become pawns in the Russian geopolitical rivalry with the United States.

Migrants are not fleeing Iraq because their lives are in danger but due to poor economic conditions. From 2013 to 2017, the Kurdistan Region of Iraq (KRI) shared a 1,000-kilometer border with the Islamic State (ISIS), even though the terrorist group focused its suicide bombers on foreign capitals across Europe and the Middle East. Yet, while the United States and its allies in Europe were able to defeat ISIS, their investments in Iraqi stability and economic development have been far less effective. The recent immigration from Iraq exemplifies how that policy is failing.

Since 2014, the KRI has been experiencing high unemployment and low wages. The government has failed to find employment for more than 98 percent of university graduates. Those that can find jobs typically only last for months.

The KRI is struggling financially as Baghdad provides only a fraction of its financial needs due to the long-standing conflict between Baghdad and Erbil. The KRI’s share of the budget is based on its population in relation to the rest of Iraq, meaning that the recent migration will cause additional harm to those who remain.

To make matters worse, approximately 95 percent of those migrating to Europe are male due to a conservative norm in Kurdish society that prevents females from traveling without a male guardian. With hundreds of thousands of immigrants from the KRI’s population leaving, the region will face a future demographic problem, further decreasing the region’s budget, privileges and rights.

Iraqi Kurds are leaving their homes in large enough numbers that they resemble the Syrian exodus that took place during their civil war. AbdulStar Majid, a Kurdish lawmaker in Iraqi Kurdistan’s parliament, told me that 37,000 people have left the KRI for Europe just this year. Many transit Turkey into Europe while others fly to Belarus to enter into the EU.

According to The Summit Foundation for Refugee and Displaced Affairs (SFRDA), 633,273 Iraqis have migrated since 2015 with 185 missing and 261 having lost their lives. More than 150,000 of those are from the KRI, a region with a population of six million people. Ari Jalal, SFRDA’s director, stated that these figures are preliminary and exclude those under eighteen years of age.

Preliminary data shows almost every household with young members has one immigrant. A survey conducted in some regions of Sulaymaniyah by the Rue Organization for General Awareness found that 46 percent of the participants responded that they plan to leave while 16 percent avowed that they can’t leave due to financial burdens. The figures suggest that most have lost their hopes in the system. It means democracy has failed them as democracy is based on hope.

Most of those who are leaving Iraq were raised in a semi-democratic political system and have a strong belief in European democracy. Moreover, they have high expectations, are connected to the internet, and attracted to the European way of life. Social media has helped smugglers in manipulating public opinion, convincing immigrants that a risky route is worth taking even if death is possible. So far, more people have lost their lives migrating to Europe than all youth deaths due to Covid-19 since its outbreak in 2020.

One smuggler based in the KRI told me that one needs between $10,000 to $12,000 to make it to a European country. This is a significant sum considering that the GDP per capita in Iraqi Kurdistan is a little over $4,000. Many families are selling assets such as their homes in hopes of getting remittances to their family members who have found refuge in Europe.

Immigration to Europe from the KRI is not a new phenomenon. Currently, more than one million Iraqi Kurds are living in different European countries. Most immigrated in the 1990s when the region was drowning in a tumultuous civil war. Yet after thirty years of self-governance, the region is experiencing similar levels of migration as it did under foreign occupation.

In the past, immigrants left the KRI individually or in groups of two or three, but now larger groups of fifty to seventy are leaving together. For instance, in one neighborhood in Saidsadiq, more than seventy-four youngsters migrated together on the night of October 20. Likewise, on September 19, 420 people left together from Sulaymaniyah, a city with 1.2 million people and the most secure of Iraq’s cities. Similar trends are occurring throughout Iraq and the KRI.

Although immigration from the Middle East is largely spurred by security concerns, current trends put economics front and center. In the Middle East, the West must double down on investing in economic and social infrastructure rather than just military capability, which has been a destabilizing force more often than not. Poor economic conditions should be viewed as a security challenge and not only a side effect of instability.

Farhang Faraydoon Namdar is a researcher and journalist covering the Middle East, he was the former Editor in Chief of Birst Newspaper. He has translated books and articles including Francis Fukuyama’s State Building: Governance and World Order in the 21st Century into Kurdish. Currently, he is head of foreign relations at Kurdish Social Democratic Youth Organization and a researcher at Gorran Movement/Iraq.