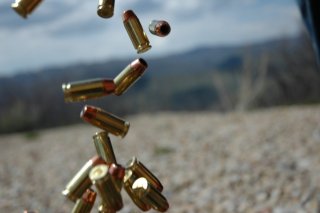 President Joe Biden campaigned on a platform to unify the nation, but since taking office many of his actions have seemed to run contrary to that message. That included his repeated calls for gun control and to ban popular semi-automatic rifles, which are used widely in both red and blue states. That was hardly a unifying message, and by taking executive action to address gun violence—because he claimed lawmakers wouldn't—the president further suggested that he's willing to let the country "unify" around his actions.

Now Biden is seeking to punish gun owners and at the same time chastise Russia by further banning the importation of firearms ammunition even as the country faces the greatest shortage of cartridges it has ever seen.

"New and pending permit applications for the permanent importation of firearms and ammunition manufactured or located in Russia will be subject to a policy of denial," the U.S. State Department announced last week. The start date for the "ban" would begin on September 7, 2021, while the sanctions are expected to be in place for a minimum of twelve months. The sanctions were a response to the alleged poisoning last year by the Russian government of opposition leader Alexei Navalny.

As the National Rifle Association's Institute for Legislative Action also noted, "Ammunition exports to the United States are only a small percentage of the GDP of the Russian Federation, but Russian origin ammo makes up a large part of the American ammunition supply."

Of course, the ban on Russian-made ammunition is likely to have little impact on Russian President Vladimir Putin, even indirectly. Even Navalny has said so publicly.

"There's no need to apply sanctions on Russia," Navalny told the New York Times last week. "For now, all sanctions were tailored to avoid almost all significant participants in Putin's gangster gang. Do you want evidence? Name one real evildoer who suffered. The airplanes, the yachts, the billions in Western banks—everything is in its place."

In other words, Putin and his pals won't suffer, but American shooters will continue to struggle to find popular ammunition and be forced to pay a premium.

There has been much discussion online suggesting a lot of shooters don't feel as if they'll be directly impacted because—as they put it—they don't use the Russian ammo. However, many others do—a point noted by firearms instructor Greg Ellifritz in his blog for Active Response Training.

"While not many shooters like shooting steel-cased Russian ammo in their firearms, there is a demand for the cheap stuff," Ellifritz wrote. "Industry experts note that somewhere between twenty percent and thirty percent of the ammunition sales in the USA involve ammunition imported from Russia.  We know YOU don't shoot Tula ammo in your custom pistols, but the yahoo at the range who doesn't know any better is doing mag dumps with the stuff."

When the cheap Russian ammo isn't available, those other shooters will have to buy the more "expensive" ammo, drying up the supply and driving up the prices.

"Availability of cheap Russian ammo acted as a pressure release valve for the prices of brass-cased ammo produced in more developed countries," added Ellifritz. "When the regular Russian ammo shooters can’t get their fix, they will start buying the stuff that the rest of us shoot. That means the gradual drop in ammo prices will come to a quick halt. Ammo prices will rise across the board this year and next."

The end game for the Biden Administration may not even be to punish Russia but could actually be a form of gun control that isn't so direct.

"Cutting off the largest single source of imported ammunition to the United States can only reduce supply and drive ammunition prices higher," Reason.com reported, adding, "The control freaks who gravitate to government office are clever and uncompromising creatures. They're perfectly capable of finding ways to hurt people they don't like while pretending to do something noble."

In this case, ammunition could become so expensive some shooters hang up their guns. Perhaps Biden isn't as out of it as some have suggested—or perhaps he's getting advice on how to best implement backdoor gun control, like a certain ATF nominee favored by many on the left. Time will tell.