Why Do Fully Vaccinated People Keep Getting COVID-19? (Don't Panic) 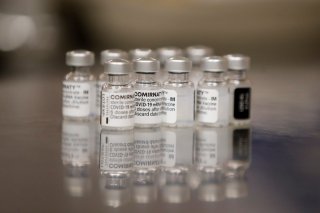 By most accounts, the coronavirus vaccine rollout in the United States has been a broad success. As of late July, roughly 57 percent of Americans had received at least one dose of the Pfizer, Moderna, or Johnson & Johnson vaccine, and just under half were fully vaccinated—a rate among the highest in the world, despite America’s large population. All U.S. states except for Hawaii have been fully re-opened, and coronavirus cases are significantly decreased from their highs in late 2020, although there has been another uptick in recent weeks.

Yet as the number of fully vaccinated Americans increases and life returns to normal, a startling trend has emerged: a small but not insignificant number of fully vaccinated people have contracted the coronavirus anyway. Three baseball players for the New York Yankees and a backup Olympic gymnast came up positive for the virus during procedural testing. A group of Texas Democrats in Washington, DC, having traveled to the capital to prevent the passage of a voter ID bill, also tested positive for the virus—and, moreover, infected a staffer in the office of Speaker of the House Nancy Pelosi.

These cases are known as “breakthrough infections”, infections that the vaccines fail to prevent. They have caused worry among vaccinated Americans; some have called for a return to wearing masks. More ominously, these cases have been cited by anti-vaccine activists and conspiracy theorists as evidence of the vaccine’s supposed ineffectiveness.

The important thing to remember is that none of the vaccines claimed one hundred percent effectiveness. Each was judged by the FDA to have an effectiveness of roughly 90 percent—meaning that out of every ten average recipients, one would still be at risk of developing a noticeable infection.

Another crucial fact: while some vaccinated people have contracted the coronavirus, extremely few have had serious cases requiring hospitalization. Hospital workers have observed that of current patients hospitalized for the virus, roughly 97 percent were unvaccinated.

While the coronavirus “Delta” variant has caused concern for its comparative ease of transmission and has fueled a spike in hospitalizations, the same data pattern has held: unvaccinated Americans are far more likely to become seriously ill or die than those who have been vaccinated.

Public health officials have also suggested that more vaccinated Americans might have had mild coronavirus cases at some point after the vaccine but did not experience severe enough symptoms to be tested, making the rate seem lower. Olympic gymnasts, baseball players, and government officials are tested regularly for the virus, but their cases may have been mild enough to go unnoticed if not for their positions.