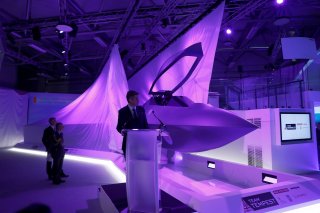 Today, fifth-generation fighters rule the roost. Because of their enormous design, production, and operating costs, they tend to be developed by the countries with the most significant militaries—most prominently the United States, Russia, and China, each of which have devoted significant resources to operate them. The American F-22 Raptor jets and F-35 stealth fighter jets are probably the two best fighter aircraft in the world, although other modern planes, including Russia’s Sukhoi Su-57 and China’s Chengdu J-20, could credibly threaten them in the event of a conflict.

In the middle of this, Europe, which has nations that routinely fail to meet their contractually obligated 2 percent defense budgets as members of NATO, might not seem like the obvious place to expect the world’s next premier jet fighter to emerge from. Yet Europe has a long and distinguished history in aerospace manufacturing and several of its designs for a future fighter, including the BAE Systems-led “Tempest” and the Dassault Aviation-led “Future Combat Air System” (FCAS), are already in the works. Europe’s prospects for competing in the sixth-generation race received a major boost two weeks ago after Gen. Luca Goretti, the chief of staff of the Italian Air Force, indicated that those two projects would be combined together, according to reporting by Reuters.

The consequences of this announcement could be significant. The airplanes under development in Europe have a major advantage over similar programs in Washington; they can, to some extent, replicate the successes of earlier American planes and take advantage of new technologies developed in recent years.

The joint program would take place between Britain, Italy, and Sweden. These countries are presently involved in the development of the Tempest, and France, Germany, and Spain, which are each working to develop the FCAS. The Tempest is currently scheduled to go into service by 2040, replacing the existing Eurofighter Typhoon; the FCAS, to enter service by 2045, would also replace the Typhoon, in addition to France’s Rafale jets and Spain’s aging F-18 Hornets. Goretti noted that, given the similarities between the proposed planes, it made little sense to try to develop both independently of one another, as this would involve significant duplication of work.

But the success of a joint Tempest-FCAS project is by no means certain. One area of objection that could undermine the project are the repercussions of Britain’s “Brexit” from the European Union, which complicates its commercial relations with Europe.

A second sticking point is the recent AUKUS security pact, which cut France out from a lucrative submarine contract with Australia; the deal, which was kept secret from France until its announcement, could lead to Paris’s objection to Franco-British cooperation in other defense contracts.