Why Even F-35 Fighter Pilot Helmets Are Super Expensive 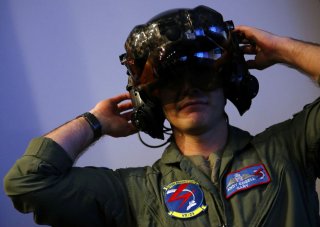 It is no secret that the Lockheed Martin F-35 Joint Strike Fighter is one of the most expensive aircraft programs ever—and it has a $1.5 trillion price tag. Even the fighter pilot’s helmet is super expensive—in fact it has been compared in price to that of a supercar!

Each helmet costs upwards of $400,000, but in addition to being super expensive, the helmet is super advanced—and engineers have said it is worth every single penny.

“The helmet is much more than a helmet, the helmet is a workspace,” said Air Force Chief of Staff General Mark A. Welsh III at a 2015 press briefing. “It’s an interpretation of the battle space. It’s situational awareness. Calling this thing a helmet is really…we’ve got to come up with a new word.”

Lockheed Martin explained, “The F-35’s Helmet Mounted Display Systems provide pilots with unprecedented situational awareness. All the information pilots need to complete their missions—airspeed, heading, altitude, targeting information and warnings—is projected on the helmet’s visor, rather than on a traditional Heads-up Display.”

What this means is it can reduce the pilot’s workload but also increase responsiveness. The helmet helps create a type of convergence of man and machine that allows the pilot to better access the aircraft’s Distributed Aperture System (DAS), which streams real-time imagery from six infrared cameras mounted around the aircraft to the helmet. This essentially allows pilots to “look through” the airframe, while it also provides pilots night vision through the use of an integrated camera.

In addition to the high tech displays, the helmet’s shell is also truly space age—made out of a “bubble of carbon fiber,” which can reduce the weight and thus remain comfortable for extended periods. The layers of carbon fiber provide a checkerboard pattern that helps provide rigidity, making it 50 times stronger than carbon steel, yet it weighs just 4.8 pounds.

The helmet is also reinforced with Kevlar, and while it doesn’t provide the same ballistic protection as the current infantryman’s “brain bucket,” it could provide protection during heavy combat or emergency ejection. The materials further provide noise reduction that can allow the pilot to retain focus. The helmet’s polycarbonate visor has been described to protrude much like a light bulb, but otherwise the helmet is far more streamlined, while it is integrated with features such as night-vision goggles.

Each helmet is custom-fitted to the wearer so to ensure a perfect fit even under intense G forces. This involves taking a 3D scan of the pilot’s head, which enables precise cutting of a foam liner by laser. Then each pilot has his/her eyes measured by a special “pupilometer” to align the optic package to just 2mm off the center of the pupil, which aids in ensuring that images are in the field of vision to reduce eye strain and fatigue.

Given the cost of the F-35 it makes sense that the pilots’ helmets are absolutely perfect. No word on whether retired F-35 pilots will get to keep the helmets when they retire, but that would make one truly expensive souvenir.