Why the F-35 Is Clearly Superior to Russia's Su-57 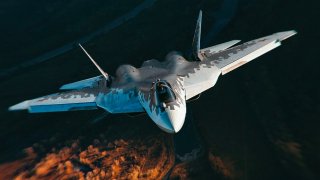 There are a few reasons to think that the Russian Sukhoi Su-57 stealth fighter could be falling behind the U.S. Lockheed Martin F-35 Lightning II, F-22 Raptor, and whatever innovations might be being built into the emerging sixth-generation aircraft.

Why? There are several key areas that jump out for consideration, relating to stealth configuration, hypersonics, and manned-unmanned teaming.

Obviously many details about the Su-57 are not available, perhaps apart from what gets mentioned in the Russian press. However, a few recent articles in Russian-backed newspapers indicate the country may be behind the United States when it comes to manned-unmanned teaming or a “loyal wingman” capability when it comes to the F-35. For example, for many years now the Pentagon, Air Force, and other military services have been advancing a “loyal wingman” concept with the F-35, meaning drone flight paths, sensor payload and data analysis can happen in the cockpit of a fifth-generation aircraft.

The means operational effectiveness and tactical ability are exponentially improved because drone video and data feeds do not first need to go through a ground control station before reaching the aircraft. This technology, which has now already been demonstrated by the Air Force through programs such as the “Valkyrie” drone which has flown with an F-35, was being worked on by Air Force Scientists nearly ten years ago. In 2014, I spoke with former Air Force Chief Scientist Dr. Gregory Zacharais who specialized in autonomy. At the time, he envisioned that U.S. F-35 manned-unmanned teaming was moving along and likely to emerge in coming years. It appears he anticipated correctly. This capability also brings virtually unprecedented operational advantages such as the ability for an F-35 to send a forward drone into hostile territory to test enemy air defenses, blanket an area with Intelligence, Surveillance, and Reconnaissance (ISR), or even fire weapons when directed by a human. Perhaps most of all, the “loyal wingman” concept greatly reduces latency and sensor-to-shooter time for air attack.

Russia, however, based upon a report last year in a Russian publication called Izvestia, appears to be working to network its S-70 Okhotnik-B drone with the Su-57 in a potential effort to match or parallel U.S. manned-unmanned teaming initiatives. While details may not be known, it appears at least in a cursory fashion that they may be behind, given the Air Force is already beginning to demonstrate direct data link connectivity between drones and fifth-generation aircraft.

Secondly, while many attributes of stealth are not visible to the eye per se, especially when it comes to internally buried engines, thermal management, or radar-absorbent coating materials, the Su-57 simply does not look as stealthy as an F-35. It looks like the Su-57 has an internal weapons bay, and appears to have an F-22-like dual engine configuration. It looks a little less rounded, blended, and smoothed over when compared to the F-35. That being said, the shape of the Su-57 is indeed stealthy as it does appear to blend wing and body and operate with horizontal structures. The Su-57 is listed as being able to reach Mach 2 speeds. That's not as fast as a U.S. fifth-generation F-22 which is reported to be able to reach Mach 2.25. This is not even considering the possible speed of the emerging sixth-generation aircraft.

Despite a comparison of each aircraft's apparent stealth properties, much of the F-35’s superiority resides in its mission systems, long-range, high-resolution sensors and targeting, computing, weapons range, and guidance systems. These variables, particularly when it comes to the F-35s ability to outrange enemy targeting sensors and use “sensor fusion” to rapidly integrate and analyze otherwise disparate pools of incoming data, are likely to be the factors that cause the F-35 to be superior in capability and combat performance.  It is not at all clear that the Su-57 will operate with an AI-enabled computing system anywhere comparable to the F-35 or be able to fire weapons with paradigm-changing levels of guidance technology such as the AIM-9X’s “off-boresight” targeting. Little is known when it comes to the F-35's electronic warfare suite. However, it is known to be extremely advanced.

This could be quite impactful as it could detect and jam enemy weapons guidance systems or intercept communications. The defense industry has also been working with Pentagon and Air Force engineers to build in countermeasures to enemy countermeasures essentially. In other words, they've been developing technologies that can withstand or overcome enemy attempts to jam weapons guidance systems. Should an enemy attempt to jam radio frequency or infrared targeting mechanisms guiding F-35 launched weapons, there may be electronic warfare countermeasure or various communications hardening techniques such as frequency hopping. How far along is the Su-57 when it comes to course-correction air-launched weapons? Weapons guidance systems and resistance to jamming?  While Russia did demonstrate advanced EW tactics during its attacks on Ukraine, the Su-57 simply may not be able to compete.

On the weaponry front, however, the Russian papers have reported that the Su-57 has carrying “prototype” hypersonic air-to-ground missiles.

Quoting unnamed sources, a report last year in Russia’s state-run RIA Novosti newspaper says the missiles used in Su-57 tests were “functional, full-size mock-ups,” but not yet launched. The RIA Novosti essay adds that the “dummy missiles lack a propulsion system, fuel, and warhead but are otherwise identical to the real weapon in terms of weight and dimensions.”

The source cited in the Russia paper also says that test versions of the weapon include “seeker heads and electrical circuits.” The paper adds even more detail about the new weapon, describing it as “a compact, air-to-surface weapon intended to destroy adversary air and missile defense systems, and cruise and ballistic missile launchers.

Several things come to mind regarding this claim, as there is no indication of how far along or functional this capability may be, and the U.S. Air Force is making rapid progress with its Air-Launched Rapid Response Weapon or ARRW hypersonic weapon. The ARRW is a fast-progressing fighter jet-fired hypersonic attack weapon reported to be able to reach speeds of more than Mach 20. While Russia claims superiority when it comes to hypersonic weapons, there is much to determine as to its potential superiority when it comes to fifth-generation fighter jet-launched hypersonics. In short, the United States may already be in front when it comes to F-35 weaponry and hypersonics, or on track to close the gap quickly. One reason this is likely because the F-35 is engineered to accommodate paradigm-changing new weapons technologies through its ability to perform software upgrades.

Overall, while much may not be known, it seems extremely unlikely that a Su-57 could in any way truly rival an F-35.