Why The Fourth Round of U.S.-Iraq Talks Missed the Mark 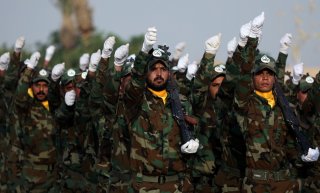 The United States and Iraq concluded the fourth series of strategic talks on April 7, emphasizing America’s troop presence in the region and the increasing ability of the Iraqi security forces. The talks, which began last June under the Trump administration, covered a wide range of issues including power, elections, trade, and climate. However, one significant subject was not broached—Iranian-backed militias.

Since the onset of his premiership, Iraqi Prime Minister Mustafa al-Kadhimi has struggled to rein in Iranian-backed militias, which wreak havoc on Baghdad’s political, military, and economic spheres. These Shiite proxy groups likely pushed Kadhimi to request the latest round of strategic talks with the United States as they have pressured the prime minister for months to drive American troops out of Iraq.

The United States has sustained a military presence in Iraq since it invaded the country in 2003. Most troops were withdrawn in 2011 but returned three years later as the dominant coalition partner in the fight to defeat the Islamic State (ISIS). The Popular Mobilization Units (PMU) also materialized at this time in Iraq, initially joining the coalition to counter ISIS.  As the Islamic State’s grip on the country weakened, some PMU umbrella groups shifted their agenda and began to defy Iraqi law and actively support the interests of Iran.

Through its militias, Iran has been able to deeply entrench its networks of influence in Iraq. The PMU was fully integrated into Iraq’s security forces in 2018, although militants operate outside of the law. Political parties with deep Iranian roots, like the Badr Organization, have succeeded in obtaining access to Iraq’s state institutions and political parties. Militias have also infiltrated Iraq’s economy and financial sector. The Iranian Revolution Guards Corps (IRGC) has set up front companies in Iraq to facilitate the launder of money and transfer of weapons. Tehran has also been careful to maintain Iraq’s longstanding reliance on Iranian energy, which provides 45 percent of its electricity.

In another effort to sabotage improved U.S.-Iraq relations leading up to the strategic talks, Iranian-backed militias set up an impromptu parade in late March. Armed militia members essentially took over central Baghdad and drove through the streets spreading propaganda and issuing threatening messages to onlookers. The militiamen threatened to cut off Kadhimi’s ear if he did not dismiss all U.S. troops from the country. The parade, coupled with more rocket fire targeting Americans, emphasizes Tehran’s significant influence in Iraq.

If the goal of U.S.-Iraq strategic talks is improved relations between the two countries, Iranian influence must be addressed. The April 7 discussions missed the mark by excluding coverage of the most significant roadblock to strengthened U.S.-Iraqi ties. Going forward, proxy groups will likely continue to launch rocket attacks in Baghdad and undermine Kadhimi’s interests.