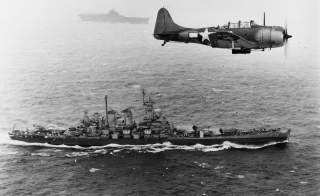 USS Washington and its sister, North Carolina, were the first American battleships built since 1921.