Why the Kimber Stainless II .45 ACP Shines Above the Rest 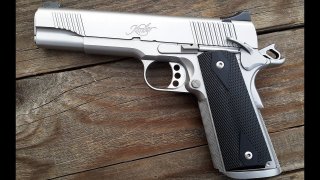 For more than one hundred years the Colt M1911 .45 pistol set the standard for reliable and accurate handguns. It was designed by the legendary John Moses Browning for Colt and developed to address the lack of “stopping power” with the then—standard Colt M1892 revolver. The M1911 remained the U.S. military’s standard sidearm throughout World War I, World War II, the Korean War and Vietnam—and was only replaced due to political pressure in the 1980s. Truth be told even in 2020 the design is as reliable as the day Browning developed it.

While Colt once was the only game in town, once the patents expired the 1911 platform was then fair game for other players. There are plenty of excellent 1911s out there that don’t have the name “Colt” on the side—just as there are now many excellent AR15s, so much so that Colt (the maker of the Armalite-designed firearm) announced recently it would reenter that market after briefly exiting it last fall.

Among the fine offerings is the Kimber Stainless II .45 ACP, which features solid stainless steel construction that ensures a long lifetime of consistent power and precision. It takes the time-tested 1911 and updates it for the twenty-first century. This includes its rosewood checkered grips, which give the Stainless II a classic 1911 feel, while its fiber optic front sights allow for quick target acquisition.

Introduced in 2016, the Kimber Stainless II has made a serious impact with shooters and topped the top ten list for best selling semi-auto pistol handguns this year according to data from the National Shooting Sport Foundation (NSSF). It features a full-length guide rod that provides improved balance and recoil management for more comfortable use.

The fact that Kimber has built the Stainless II to be as fine and look as functional is likely is why it has been sought after by shooters. While it is pricier than some budget 1911s, this one packs in serious value and even features match grade barrel. The stainless steel construction is ideal for resisting rust and corrosion, while each part is true quality that fits tightly together.

Simply put, there are plenty of 1911s out there, but the Stainless II shines above the rest.