Why the M14 Remains America's Most Controversial Military Rifle 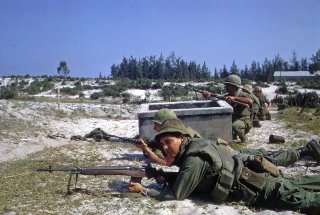 Depending on who you ask, it was either a reliable and accurate firearm or it was an antiquated design that was heavy and hard to control.

It was the M14, the last U.S. military rifle to be produced at the Springfield Armory in Springfield, Massachusetts. The rifle was essentially an improved version of the M1 Garand, but it served in the U.S. military for the shortest time of any battle rifle.

The M14 was the product of nearly fifteen years of research and development, during which time a new capability was added to it – select fire. Unlike the M1 Garand, the M14 was able to switch between semi-automatic and fully automatic modes. The thinking was that it could provide the capabilities of both the Browning Automatic Rifle and the M1 Garand. But as the gun's production began, some early operational experience issues were identified.

The primary problems weren't unique to the M14. Many firearms have a "teething" process, and in the M14's case that consisted of its fragile receiver and malformed bolts, yet instability during automatic fire was another problem altogether. Most of the problems were addressed via better quality control, but the stability issue could only be addressed by limiting most of the rifles produced to semi-automatic mode. As a result, the specially designed M14A1, which retained the fully automatic capabilities, was meant to serve as a rifle squad's automatic weapon – essentially replacing the BAR with the M14A1.

Despite these issues, the M14 was still a major improvement over the M1 Garand. It was two pounds heavier than the Garand, but it was chambered for the 7.62x51 NATO cartridge, which was slighter smaller in overall size yet still delivered about 90 percent of the energy while it provided the same range and accuracy. The adoption of the NATO cartridge also made the weapon compatible with other NATO small arms of the Cold War era.

More importantly, it vastly improved upon the M1's eight-round en bloc clip by utilizing a twenty-round detachable magazine. The rifle featured a front blade and peep sight, and the latter could be adjusted for windage. The rifle was accurate to five hundred meters and beyond. The M14 could also be used with the M2 bayonet and M76, while the military's M2 bipod could be installed on the M14A1s for use with automatic fire.

The M14 was the standard infantry rifle for all U.S Army and U.S. Marine Corps units that deployed to Vietnam in 1965, but time was running out for the weapon. Secretary of Defense Robert McNamara ended the procurement in 1964, and selected the M16 as its replacement. By 1970, only a handful of the M14s remained in service with the U.S. military in Vietnam.

That marked the end of the line for America's last full-power "battle rifle," as the M16 ushered in the American military's "assault rifle" era. The M14 had served as the standard infantry rifle for just seven years.