Why the Marines Want to Replace Their LAV Amphibious Assault Vehicle 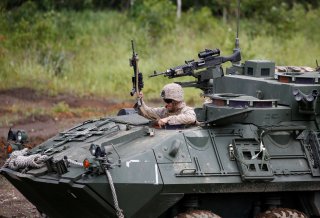 The Marines’ current reconnaissance vehicle, the LAV, or Light Armored Vehicle is set to be replaced by the USMC’s Advanced Reconnaissance Vehicle. ARV prototypes should be ready for initial testing by the end of 2020, and field testing sometime in 2021.

Though the Marines’ LAVs served with distinction, they’re getting old. They originally entered service in 1983, and though they’ve been steadily upgraded since then, they’re beginning to show their age. They may not be suited to future fights either. Commandant of the Marine Corps Gen. David Berger said that the “Light Armored Reconnaissance today is built great for another Desert Shield, Desert Storm,” but explained that, “I don’t see that likelihood as being very great.”

Tanks and artillery are unfortunately not amphibious. As the United States adjusts from a focus on ground operations in the Middle East to confronting peer-peer rivals like China and Russia, their operation doctrine is shifting. The Corps will be offloading their tanks in the future, along with much of its artillery and airplanes in favor of rocket artillery and a LAV replacement, to give Marines greater range while at sea.

The Marine Corps needs vehicles that will be able to survive in the Pacific, and counter threats from China, and the ARV is intended to provide that capability.

According to the Navy, the ARV will “provide transformational sensor, communications and combat capabilities to collect and communicate information, while integrating robotics and artificial intelligence in manned-unmanned teams,” with an emphasis on bringing the fight to the enemy from afar. “Using ARV, a crew will be able to use advanced onboard sensors and unmanned systems to detect, recognize and identify threats at extended ranges.”

To that end, the Office of Naval Research awarded two contracts to two separate companies to design and fabricate a full-scale functioning LAV replacement for trials. One contact went to General Dynamics Land Systems, the original LAV manufacturer, and another to SAIC.

Since General Dynamics built the original LAV, it is assumed that their vehicle will be an evolution of the LAV, likely with an upgraded main gun and improved swimming capabilities.

In contrast, the SAIC design is expected to push the envelope and incorporate new technologies that while unproven, could be a more radical design, rather than an incremental improvement. If design and production schedules are not disrupted by the COVID-19 pandemic or other unforeseen circumstances, the ARV prototype could go though the government testing ringer by the end of 2020.

Ready or not, the Marine Corps is keeping abreast of changing world threats by adapting as well. Though losing tanks and artillery is no doubt melancholy news for some Leathernecks, they’ll be better prepared for new threats—particularly in the South China Sea and the Pacific region as a whole.