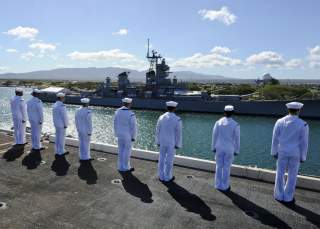 Recent discussions of how to answer current naval challenges in the Pacific would do the old U.S. Navy “Gun Club” proud. The last few years have seen calls to bring the Iowa-class fast battleships out of retirement (again) and refit them for a new age, or for building a new class of battleship entirely to force its way into A2/AD environments being created by the People’s Liberation Army Navy in the Pacific. On the surface, these arguments have some merit. At present, the U.S. Navy is struggling to find real estate for new systems and more firepower on its Block-III Arleigh Burke-class workhorses, even as China prepares to launch a formidable modern class more cruiser than destroyer. Battleships were built to gun carriers intended to give and take punishment in brutal, broadside slugging matches against peer or near-peer competitors. As pro-battleship advocates have noted, some venerable World War II battleships took significant punishment to sink.

But sink they did. By the time Germany’s Bismark sortied into the Atlantic or Japan’s Yamato and Musashi began their suicidal runs toward Leyte Gulf and Okinawa the age of battleship slugging matches had already passed, and juggernauts which did not travel under the protective umbrella of fighter escorts and destroyer screens were swiftly dealt a death blow by enemy forces which were cheaper to build and deploy. When battleships did fight one another in the modern era, luck was as much a factor as skill or strategy, with unappreciated design flaws or technological obsolescence killing entire crews. Advocates for modern battleships would do well to reflect less on the class of warship itself and more on the capabilities offered by those warships in their time and build on that reflection by asking themselves whether a large battlewagon is truly the best solution to achieve those capabilities in the twenty-first century. A close analysis shows that the concept of leviathans like the U.S. Navy’s old Missouri and Wisconsin are best suited as historical artifact rather than the capital ships of tomorrow.

The first and most important role of battleships in their classic conception were to be the nucleus of fleets which were the primary means for killing the big ships of other fleets. Different schools of naval thought sought to employ them in slightly different ways, with followers of Mahan seeing them as the primary weapons to wrest control of the seas by engaging and destroying enemy fleets (a school which Japanese military planners heavily subscribed to, both in their surface and carrier operations) while thinkers like Corbett would have seen them as weapons to exercise limited control of the sea for discrete purposes and periods of time, or else deny the enemy total control (a school which found adherents in Russian and Soviet naval thought and endures today). This was a highly traditional view of battleship use, which can be traced in a nearly unbroken line from major fleet actions during the colonial period through Trafalgar and on to Jutland.

This changed during World War II, however, as it became increasingly clear that the maturation of carrier air power allowed large fleets to engage “over the horizon” without ever sighting one another. It was carrier-based air wings, not battleships, which halted Japanese offensives at Coral Sea and Midway and then fought the major fleet actions of the Allied counter-attack. Even members of the U.S. Navy’s “Gun Club” of battleship aficionados recognized the change in combat paradigms, with Admiral William Lee declining an opportunity to chase the enemy fleet during the Marianas campaign independent of the carrier striking force of the 5th Fleet. While engagements were fought between battleships during the Bismark’s attempted breakout, the Naval Battle of Guadalcanal, and as a part of the Battle of Leyte Gulf, they were not decisive engagements between battle fleets.

Surface vessels continued to fade in prominence during the Cold War, with the primary striking assets of Allied and Soviet navies being strategic submarine forces and aviation assets. Recently, it has become clear that even a relatively modest anti-ship missile complement will make a platform a potent ship killer. Wargames have raised the possibility of Iranian small boats being able to successfully attack or even sink supercarriers through swarm attacks. Ultra-quiet diesel submarines have demonstrated that they can be a potent threat to all manner of surface and sub-surface assets by virtue of stealth and modern torpedoes. And the United States’ dominance in the naval sphere means that the greatest threat posed to it is not lacking the latest large capital ship in a critical fleet engagement, but an asymmetric navy meant to nullify the advantages of its large and modern fleet. Carrier air groups, ultra-quiet nuclear attack submarines, Arleigh Burke-class destroyers, and the future frigate expected by the early 2020s arrayed in small groups or in full fleets possess similar if not superior firepower in their array of torpedoes and anti-ship missiles than even the beefiest battlewagon fleet of the World War II. It’s not a matter of lacking firepower so much as not being able to bring that firepower to bear on a target that will prove decisive, and a new platform will not fix that problem.

Battleships got a second life in the World War II as naval artillery in support of amphibious assaults. Pre-war battleships which were too slow to escort the fast carriers and participate in fleet actions were seconded to the task groups to bombard Japanese bunkers and troop concentrations in the Pacific and performed similar duties in the Mediterranean and Normandy landings. The battle wagons would contribute their big guns to American efforts in Korea and Vietnam as well.

Even in this new role, however, the battleships were not to remain prominent for long. Destroyers were preferred by Marine shore detachments for their ability to bring down fire with greater precision, discretion, and rapidity. In time, the evolution of naval aviation allowed carrier-based aircraft to put more and more accurate fires on target, on-demand. The debut of land-attack cruise missiles deployed on ships effectively rendered big gun bombardment obsolete— a smaller ship could deliver the same fire effect with greater accuracy from international waters, removing the requirement for big ships to be risked in littoral waters. Apart from a diversionary bombardment of Kuwait during Operation Desert Storm, this was the end of shelling as a main strategic component of operations.

America has operated massive bombardment campaigns of targets in Desert Storm, Operation Enduring Freedom, and Operation Iraqi Freedom (alongside more limited interventions in the Balkans, Libya, and Syria) through the use of land-attack missile and in each case rendered a superior effect than the often underwhelming performance of flat trajectory gunfire in the latter stages of the Pacific campaigns during World War II. Fears that these capabilities will not prove sufficient to reduce artificial islands being constructed by the Chinese in the Pacific are not due to a lack of vessels large enough to carry land-attack elements, but because of extensive anti-aircraft defenses, a shortage of ships generally, and a hardening of the targets making them resilient to any bombardment. If the concern is that a heavier weapon is necessary to address this problem, that would call for a new land-attack missile or stealthier aircraft—not a bigger boat.

Battleships also had diplomatic and symbolic value, making a deep impression on foreign allies and competitors during port visits and reviews which played a role in peacetime as crucial in some ways as their role in wartime. Theodore Roosevelt’s Great White Fleet announced the United States’ entry as a power in world affairs. Bismark and Tirpitz projected the impression of a great Germany, even if its army, navy, and air force were actually not quite so modern or so capable as the propaganda let on. This can be seen as even more important today, where nuclear weapons and an interconnected global economy make the avoidance of war through soft power ever more important. Here again, however, the battleships have been supplanted. Aircraft carriers and amphibious assault ships are every bit as physically imposing as their battleship cousins and, to be honest, even destroyers and frigates look menacing and impressive to the vast majority of people who will not have warships outside of news reports or movies. Aircraft carriers and landing ships also have the flexibility to be many things at once—strike platforms for land and air forces, human assistance platforms, and diplomatic symbols all in one fell swoop. One tends to suspect that if a modern battleship were capable of the same dexterity it would, in fact, simply be an up-armored aircraft carrier.

What are their Weaknesses in the Modern Environment

In addition to having been thoroughly replaced in naval operations by other platforms in the modern context, even new battleships would retain the same limitations as contemporary platforms. Vulnerability to submarines is a factor not of platform deficiencies but the wasting away of the Navy’s anti-submarine warfare skillset and toolkit. Vulnerability to anti-ship ballistic missiles and cruise missiles is not a question of armor, but of the difficulty of intercepting such weapons and the fact that the cost-benefit analysis favors their use. Multiple such weapons can be launched against a warship and render it combat ineffective in short order, paying a relatively cheap cost to take an expensive warship and crew out of the fight. A warship need not sink in order to be lost to a commander, and the concussive power alone would be sufficient to damage sensitive systems and injure crew. World War II battleships were known to suffer self-inflicted concussive damage from the guns that they were designed specifically to carry and fire, proving that armor is no cure all to battle damage.