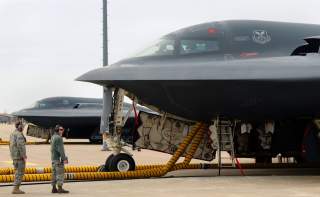 Key point: The B-21 stealth bomber may need air-to-air weapons to ensure it will reach its targets.

WASHINGTON – The U.S. Air Force’s new B-21 Raider stealth bomber could fly as early as 2021, and at least one Air Force general says he believes the new bomber could gain air-to-air capabilities to fight its way to its target. The National Interest reports. Continue reading original article

13 Sept. 2019 -- There is some precedent for a bomber aircraft with a secondary air-to-air mission. In the late 1980s and early 1990s, the U.S. Navy paid General Dynamics and McDonnell Douglas billions of dollars to develop the A-12 Avenger II, a stealthy, carrier-launched medium bomber that was supposed to replace the Navy’s A-6 Intruders.