Why This New Russian Submarine Could Dominate (Thanks to Nuclear Torpedoes) 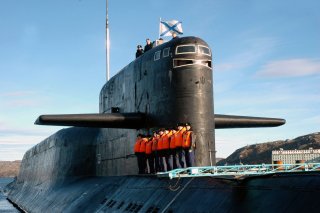 Russia has submarines, and lots of them. This particular submarine might truly be a game changer. The Khabarovsk as the submarine is called, is slated to leave its dry dock later this month to begin initial sea trials, followed by several years of testing. One source suspects that testing will be done in the White Sea, an inlet of the Barents Sea where much of the Soviet Union and Russia’s submarine testing has traditionally been done. It has the advantage of being separated from international waters, protecting testing there from being observed by other countries.

The naval expert H. I. Sutton speculates that the Khabarovsk submarine will likely be based on the Borei-class ballistic missile submarine, which it itself a very stealthy platform, and will help keep building costs low. But what else makes the submarine so dangerous? It’s nuclear torpedoes.

Not only does the Poseidon have a nuclear warhead, it is also has a nuclear powerplant. If reports are to be believed, the large torpedo is very fast, and possibly faster than any torpedo in the United States Navy or Royal Navy inventories.

Like submarines, the Poseidon could run in so-called “silent mode” at reduced speed, traveling at slow, very-hard-to-detect speeds. Once near a target, the Poseidon could increase propulsion to loud—but incredibly fast speeds—before a battle group or city could react.

The Poseidon has a virtually unlimited range and could in theory reach any place underwater around the globe. This suggests coastal cities may be the Poseidon’s target, though Russian sources have also mentioned the torpedo could be used to target American surface battle groups. Countering the Poseidon could prove to be quite a challenge.

The Khabarovsk isn’t the first Russia submarine to carry the Poseidon nuclear torpedo though. The special-purpose Belgorod submarine (essentially a one-of-a-kind highly capable spy submarine) can also carry an estimated six of the massive nuclear torpedoes. There are probably four other Khabarovsk-like submarines either planned or under construction, which will likely also carry six Poseidon missiles.

Lots is still unknown about the Khabarovsk. What is known is certainly a cause for concern, particularly the Khabarovsk’s nuclear torpedoes. How these torpedoes will be countered and how much it will cost is still anybody’s guess. Stay tuned for more.