Why Is the Old F-117 Stealth Fighter Still Flying? 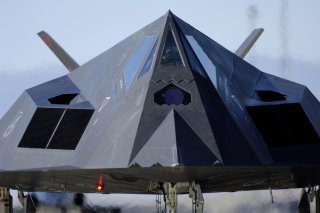 The United States Air Force “officially” retired the Lockheed F-117 Nighthawk in April 2008, but what retired actually means is debatable as two of the Cold War stealth aircraft were seen last week in the skies near Miramar Naval Base, outside of San Diego. The Nighthawk, which was the first operational warplane to be designed around stealth technology, was designed to be virtually invisible to radar, and difficult to spot with the naked eye.

The ground attack aircraft was actually so secret that it was in service for six years before the U.S. Air Force even admitted its existence. Yet for the second time this year, the aircraft was in fact spotted by keen-eyed viewers. Is the F-117 making a comeback or is something else in the works?

The F-117 was developed at Lockheed’s so-called “Skunk Works” in Burbank, California to address Soviet threats but by the time the aircraft was operational the Cold War was over and it looked like the aircraft wouldn’t be needed. However, it was the right plane for the New World Order of the post-Cold War era, and a pair of F-117s were used in December 1989’s Operation Just Cause in Panama where the aircraft targeted Panamanian Defense Forces’ barracks.

The F-117 was widely publicized for its role in the Persian Gulf War in 1991 as a ground-attack aircraft, where it was used against Iraqi positions in the early stages of the Gulf War. From the first night of the attacks, the F-117A was employed against critical strategic Iraqi command and control installations as well as key communication centers, research & development, production and storage facilities for nuclear and chemical weapons. It also was used to target especially hardened aircraft shelters at numerous Iraqi airfields.

The aircraft’s stealth airframe required a substantial amount of maintenance and the deployment of the F-22 Raptor, which offered the ability to drop guided bombs, resulted in the early retirement of the F-117. However, what is notable about this retirement is that unlike most Air Force warbirds this one wasn’t actually put out to pasture.

While five were placed in museums, most of the F-117s were actually placed in Type 1000 storage, which means the aircraft are maintained in a condition where they can be recalled to duty and fly again. This “inviolate” storage also means that no parts are pulled from the aircraft without the express permission of the type’s system program office at Wright-Patterson Air Force Base, Ohio, which technically “owns” the aircraft.

There have been unsubstantiated reports that four F-117s were secretly deployed to the Middle East in 2016, while there have been multiple confirmed flights of the aircraft in California prior to this week’s air sortie.

A photo from an aviation enthusiast circulated on the social media platform Instagram in March that showed an F-117 flying in the “Star Wars Canyon” (aka Rainbow Canyon) in California, where Air Force pilots train.

There are several other reasons why the F-117 is occasionally seen flying high. For one it could be that the planes are taken out of Type 1000 storage to determine an aircraft’s airworthiness but also to prove the efficacy of the storage procedures.

Additionally, some F-117s could be used to test stealth-detection abilities of the AWACS (Airborne Warning and Control Systems), and that could be cheaper than using the far more modern but also far more expensive F-22s or F-35s as test aircraft.

Perhaps the Nighthawk just can’t be kept on the ground!