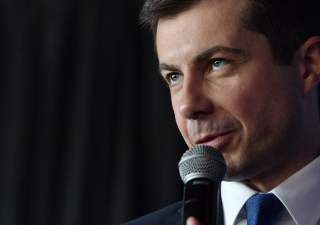 The legend of Rhodes Scholar Pete’s amazing intelligence grew again this week when he wowed the audience by naming the president of Mexico at a forum put on by Telemundo in Nevada, a feat two of his fellow contenders were unable to pull off. Pete capped off the performance by answering a few questions in Spanish.

Buttigieg has been praised for his intellectual capacity by people across the spectrum, from MSNBC to news and features reporters his media team courted to himself to Fox News’s Greg Gutfeld, who called him “the smartest one” two weeks ago. Heavy.com's Erin Laviola wrote last June—echoing many others—that, if elected, Genius Pete "would be the first president since Franklin D. Roosevelt to be fluent in another language besides English.”

Excuse me for ruining the wunderkid facade cosmopolitan liberal elders would like to imagine, but, if I may respond in the manner of Consultant Pete, the proposition that Pete Buttigieg is a polyglot fluent in half a dozen languages is bs. (Hell, he doesn’t even sound like a normal human when speaking in English.)

At the Telemundo event, Pete actually stumbled through many of his attempts at Spanish. “Gracias para hablar, uh, this evening,” was his way of thanking the hosts for having him this evening. When he spoke to Norwegian reporters, he stopped after about two sentences and said, “Sorry, I just ran out of Norwegian.” When asked on Morning Joe how many languages he can speak, he said, “It depends on what you mean by speak. I’ve got pretty rusty in my Arabic and my Dari. I picked up Dari on my way to Afghanistan.”

The one language he actually appears to speak very well, French, he did not even mention. Not exotic enough for his carefully-crafted image?

If Pete’s Spanish language abilities are enough to make him considered “fluent in another language besides English,” then he would certainly not the first one since FDR. George W. Bush delivered his Cinco de Mayo radio address with at least as much eloquence as Gringo Pete. Jimmy Carter studied Spanish while in the service, just like how Intel Officer Pete studied Arabic and Dari. Barack Obama gave a basic greeting to his Indonesian interviewer in 2009 before he ‘ran out’ of the language.

At least three of his fellow candidates who dropped out before him were also good enough at speaking Spanish to elicit side eye on the debate stage, but Beto and fellow Small Town Rhodes Scholar Mayor Sen. Booker won more mockery than fawning.

Where did the myth of Pete as a linguist par excellence arise from?

To be sure, Pete didn’t personally claim to be fluent in seven languages. In his memoir, he wrote, he “knew how to order a sandwich in seven languages.” But he did aggressively sell the image of himself as an amazing specimen, including—yes—personally vouching for himself as an intellectual. As early as 2014, less than two years into his mayorship and four years removed from his crushing defeat in the race for state treasurer, the Washington Post called him “the most interesting mayor you never heard of.” (Some wish he would remain that.)

When he introduced himself on “Real Time” with Bill Maher, he said, “People are looking for something completely different. … You could argue it doesn’t get much more different than a laid back, intellectual, young, gay mayor from the Midwest.”

On MSNBC, he also played up his own intellectual bonafides: “I think curiosity is a really important quality for leadership. … It frightens me that we have such an incurious president right now. I don’t think he’s inclined to ask questions. Obviously he doesn’t read a lot. To me, how could you be in that office and not want to use the fact that, you could have lunch with the NASA director, and then talk to the intelligence experts.”

Now, it is certainly true that Pete is head and shoulders above the incurious president. The same could be said for each of his fellow candidates and for the president’s own primary challengers.

But it’s not very charming of him to go around talking about how he’s so much smarter than you and I and all the rest of the voters, including the good people of his own college town community in Indiana, whom he dismisses as “socially conservative” people whom he feared wouldn’t vote for him if he came out as gay. His beloved line about “being a gay man in Mike Pence’s Indiana” (albeit one living in Pete Buttigieg’s South Bend) implicitly relies on portraying a wide swath of Midwestern and ‘fly-over states,’ the very places he claims he can win, as backward hellscapes. (As one who completed undergrad in Indiana, let me put it in Indiana terms: it would be a little more impressive if he won 80 percent of the vote in Martinsville.)

There is a sense that he got out over his skis. Yes, he is gifted and rising fast, but his achievements as they are—low-level McKinsey analyst, small-town mayor—are nowhere near qualifying for the highest office in the world, thus he has to puff up his qualifications and personal attributes.

Pete’s problem is ultimately not simply that his intellectual abilities appear to be overrated. It’s that he’s so smug about it. Even if he could have at one point read high literary novels in Norwegian—even if he still could read the newspaper—it wouldn’t matter. He’s damned either way. (And, as he is somebody who talks about how much he values knowledge, it strikes me as sad that he learned a whole language just to forget it.)

His attitude comes off as condescending to voters in the 2016 swing states the moderates in the race are trying to target. Those who fancy themselves ‘deplorables’ are not going to vote for a man who sounds like he looks down on people who don't read avant-garde literature about the nature of existence in its original language.

Indeed, IR Expert Pete mocked Sen. Klobuchar for whiffing on the name of the president of Mexico. (It’s Andrés Manuel López Obrador, you moron.) Donald Trump was mocked for not having a clue about the Quds Force or what the nuclear triad is and much else. George W. Bush flunked a pop quiz on the leaders of Chechnya, India, and Pakistan in 1999. Al Gore’s camp ridiculed him: “I guess we know that ‘C’ at Yale was a gentleman’s ‘C,’” his campaign spokesman said.

Trump’s problem isn’t just that he is ignorant, he’s also arrogant, making snap judgments on his own, or with the advice of Fox News, while firing professionals and downsizing the State Department; the follies of JFK’s Best and Brightest, whom Pete would have wanted to have been a part of, leading us into Vietnam show that arrogance can be a problem for those with elite educational backgrounds, too.

But we also know that both Bush and Trump won the presidency, and Bill Clinton, too, defeated UN Ambassador and CIA Director George H.W. Bush, because he was feeling the nation's pain while Bush was looking at his watch.

When the question is asked, “Who would you rather have a beer with?” most voters are not thinking about having it at a professional networking event at 6 pm on a Thursday night in Dupont Circle, Washington, DC. Voters do not want to drink with a geek who will lecture them on how he thinks he can solve drug wars and incarceration with ideas he recycled from a Ted talk.

I suggested in a recent column that Pete reminds me of Rubio the way he tries to pull off a low-rent version of Obama. I stand by that, but there’s more to it. Obama was also rated as more likable than the Republican opponents he faced in 2008 and 2012. But Pete isn’t.

Pete appears so sure of himself that he cannot heed another’s criticism. (Watch his face on the debate stage next time someone goes after him.) In that, he’s not so “completely different” from our current president, except in the manner in which he responds. While Trump shouts and denies everything confidently, Pete will go on a long-winded tangent, putting a dozen words between the start of the sentence and the expletive (where Biden would say, “That’s malarky”). He’s like Hillary in his inability to lie or deny effectively.

His tendency for obfuscation is most pronounced when the topic is the frayed state of race relations in his own town. As in his attempt to respond to the question at the debate about marijuana arrests in South Bend, or his being asked by the LA Times ed board about firing Police Chief Darryl Boykins, he pivots to systematic racism, then to the racial wealth gap, then to some other issue of racial justice before proposing that his Douglas Plan is the solution to everything. The effect on his questioners, often African-American journalists, as well as his own constituents at heated townhalls, is usually underwhelming, and frequently they try to ask the question again to get a straight answer from him.