Why Is Russia Bringing the S-400 Air Defense System to Its Bases in the Arctic? 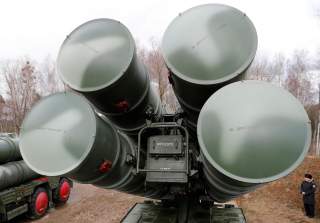 Key point: Moscow wants to be sure it can control the thawing waterways and resources in the Arctic. In order to do that, Russia is militarizing its presence there.

Russia is intensifying its efforts to exert economic and military control over the rapidly warming Arctic region.

But it's not alone. The United States is staking its own claim on the far north.

The Arctic currently accounts for 15 percent of Russia’s GDP, according to analysts Nataliya Bugayova, Alexander Begej and Darina Regio from the Washington, D.C.-based Institute for the Study of War.

The analysts in their March 26, 2019 report cite a drumbeat of news coming out of Russia.

The Russian ministry of natural resources on March 13, 2019 submitted a comprehensive plan for exploiting the Arctic. "The plan included over 100 projects intended to develop mineral resources in the region as the polar ice caps continue to shrink," according to the ISW analysts.

Meanwhile on March 20, 2019, Russian president Vladimir Putin launched the development of the major Kharasaveyskoye gas field on the Yamal Peninsula in Northern Russia. "Putin is increasingly prioritizing investment in the Arctic as a source of potential future economic growth for Russia."

"The Kremlin is also continuing its military buildup in the Far North,"  Bugayova, Begej and Regio wrote.

Russian Northern Fleet commander Adm. Nikolay Yevmenov stated that the Russian armed forces would soon finish a new air-defense base in the village of Tiksi above the Arctic Circle.

Russia has been expanding its military presence in the region in recent years with new military installations, additions to its already-dominant icebreaker fleet, and deployments of area-defense systems including the S-400 and Tor-M2DT surface-to-air missile systems and Bastion anti-ship missiles.

The Kremlin aims to solidify Russia’s position as a dominant power in the Arctic primarily to secure uncontested access to economic resources in the Arctic Circle as well as the Northern Sea Route.

Russia, of course, isn't the only country eyeing the Arctic. The January 2019 spending bill that the U.S. Congress negotiated to end the 35-day partial shutdown of the federal government includes $655 million for the first new icebreaker in 43 years for the U.S. Coast Guard. The bill also includes an additional $20 million for long-lead components for a second icebreaker.

In early 2019 the Coast Guard, which has been responsible for the U.S. government's polar icebreaking mission since 1965, operated just one large icebreaker, the 399-feet-long Polar Star, which commissioned into service in 1976.

The service also operated Healy, a 420-feet-long medium icebreaker that commissioned in 1999. Polar Star can break ice up to 21 feet thick. Healy can cut through ice no more than four and a half feet thick.

While the polar regions rapidly are warming owing to man-made carbon pollution, ice still is widespread during the winter months. A warmer climate makes Arctic sea travel easier for a wider range of vessel types, but doesn't render icebreakers any less useful than they were when the poles were less accessible.

Both existing U.S. icebreakers, in theory, can operate at either pole. But in recent years, Healy has spent most of her time in Arctic waters while Polar Star mostly has worked in the Antarctic. Both vessels sail out of Seattle.

Despite a three-year refit ending in 2012, Polar Star is prone to breakdowns. Healy is a more reliable ship than Polar Star is, but also is less capable than the larger, older vessel is.

The two new icebreakers that Congress funded in January 2019 are just the start. "It is the sense of Congress that the Coast Guard should maintain an inventory of not fewer than six polar-class icebreaker vessels beginning not later than fiscal year 2029," the 2019 defense authorization act states.

Putin ordered his government by 2024 to increase by a factor of eight Russia's sea cargo traveling along the Northern Sea Route through the Arctic, the ISW analysts noted. "The route is likely to become increasingly viable for commercial use given the melting polar ice caps, presenting new economic opportunities in global trade to Russia."

But America's own new investment in icebreakers means Russia won't be alone at the North Pole.